Hydroxychloroquine and naproxen controlled her symptoms for the next six months, and the anti-dsDNA and complement levels remained abnormal during this time. Microscopic hematuria along with 1 gram of urinary protein excretion was noted and confirmed on routine follow-up in the absence of symptoms. The serum creatinine and blood pressure were normal. Renal biopsy showed global, active diffuse proliferative nephritis (WHO Class IV), with an activity index of 13/24 and a chronicity index of 0/12; wire loops and crescent formation were seen. Pulse steroids followed by prednisone 1 mg/kg and MMF 3,000 mg/day were prescribed.

A year later, the renal disease had remitted, with preservation of renal function, normalization of serum complements and dsDNA. Prednisone was stopped and azathioprine substituted for MMF because the patient wanted to become pregnant.

Renal and extrarenal manifestations remained in remission for the next three years, during which she became pregnant and delivered a healthy daughter. Azathioprine was continued throughout the pregnancy and stopped at the patient’s request when she began breastfeeding. Surveillance serological studies during the pregnancy showed modest elevations of the dsDNA, intermittently low complements, without any clinical manifestations or other laboratory abnormalities.

Eighteen months following delivery, microscopic hematuria, along with an increase of the urinary protein excretion to 700 mg/24 hr, was noted on routine testing in the absence of symptoms, rise in blood pressure or worsening serum creatinine. Prednisone 20 mg/day and MMF 3,000 mg/day were restarted, with normalization of all urinary findings, preservation of GFR and continued modest elevations in repeated measurements of the anti-dsDNA and hypocomplementemia.

Limitations in Our Understanding of Pathogenesis of LN 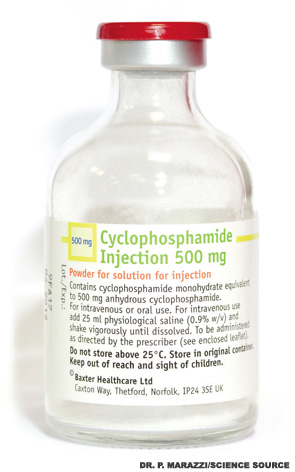 The incremental progress in renal and patient survival amongst patients with LN over the past 60 years is related to effective treatment regimens informed by studies showing the remittive effects of corticosteroids alone followed by trials of immunosuppressive agents combined with steroids.