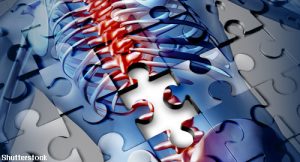 Axial spondyloarthritis (SpA), an inflammatory disease of the spine and sacroiliac joints, causes new bone formation that may lead to total ankylosis of the spine. Laura C. Coates, MBChB, PhD, associate professor of rheumatology at the University of Oxford, U.K., and colleagues sought to describe the relationship between the presence of HLA-B27 and the radiographic phenotype of axial SpA. They found patients with axial SpA who were positive for HLA-B27 had more severe radiographic damage than patients who were negative for HLA-B27. These HLA-B27-positive individuals also had more marginal syndesmophytes and more frequent syndesmophyte symmetry than those who were negative for HLA-B27. The investigators published their findings in the June 2021 issue of Arthritis Care & Research.1

Blinded to the clinical details, the investigators read the radiographs by consensus in a single, central location. They recorded the symmetry of the sacroiliac joints and lumbar syndesmophytes and the morphology of the syndesmophytes, together with the modified Stoke Ankylosing Spondylitis Spine Score (mSASSS) and the Psoriatic Arthritis Spondylitis Radiographic Index (PASRI). The mSASSS evaluates the corners of the vertebral bodies from the lower border of C2 to the upper border of T1 and from the lower border of T12 to the upper border of S1. The PASRI evaluates the vertebral bodies and the zygo-apophyseal joints at C2/C3, C3/C4 and C4/C5 for fusion. The PASRI also scores the sacroiliac joints.