You are here: Home / Articles / Conformational Flexibility in HLA-B27 Provides Clues to Development of Ankylosing Spondylitis
Print-Friendly Version / Save PDF 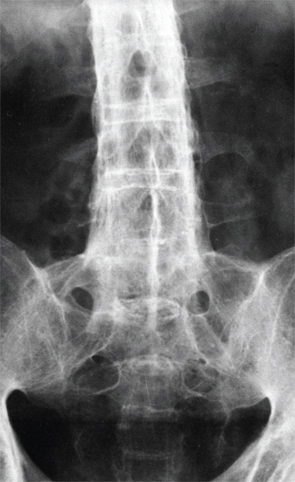 X-ray of the lower spine of a patient affected by ankylosing spondylitis. BSIP/Science Source

Understanding how human leukocyte antigen (HLA) class I molecule B27 promotes spondyloarthritis has intrigued researchers for four decades. Although the association between the single gene variant HLA-B27—specifically some of its subtypes—with ankylosing spondylitis (AS) is particularly strong, how HLA-B27 directly influences disease development has not yet been clearly explained, although hypotheses continue to be generated.

Results of recent research indicate that conformational flexibility—or the tendency of certain HLA-B27 subtypes to unfold or misfold—could be key to understanding why certain subtypes are associated with disease development, according to Robert A. Colbert, MD, PhD, co-author with Simon Powis, PhD, at the University of St. Andrews, UK, of an editorial in the May issue of Arthritis & Rheumatology.1,2

The inherent flexibility in the subtypes associated with disease “suggests that the proteins that are disease associated may behave differently,” says Dr. Colbert, chief of the Pediatric Translational Research Branch and deputy clinical director at the National Institute of Arthritis and Musculoskeletal and Skin Diseases. “There are some important differences between disease-associated and non-associated subtypes that may provide more clues about B27 disease,” he says.

HLA-B27 is associated with development of spondyloarthritis, which affects approximately 0.6–1% of the adult U.S. population. The most common type, which is AS, affects about 0.3% of that population. In an article in the Annual Review of Immunology in 2015, Paul Bowness, MD, PhD, at Botnar Research Centre, University of Oxford, United Kingdom, says that roughly 94% of patients with AS are HLA-B27 positive and that B27 is the “most important genetic factor.”3 Even so, “it still only contributes about one-third of the total heritability of AS (which is remarkably high, at approximately 90%),” he says.

For patients with the signs and symptoms of spondyloarthritis, the HLA-B27 genetic test can help pediatric and adult rheumatologists predict whether they will develop AS, Dr. Colbert explains. The presence or absence of HLA-B27 is also used to classify patients with different types of arthritis and is useful because HLA-B27 is “such a strong risk factor for developing arthritis in the sacroiliac joints and in the spine,” he says. “If a patient has signs and symptoms and you are thinking about the diagnosis, it can be a good predictor of whether someone will develop AS,” Dr. Colbert says.