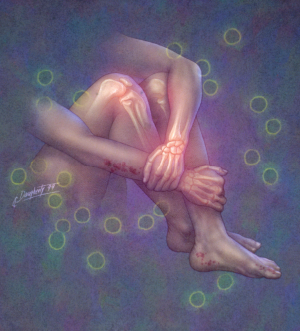 WASHINGTON, D.C.—A new, humanized anti-BDCA2 monoclonal antibody can trigger inhibition of the production of interferon, cytokines and chemokines derived from plasmacytoid dendritic cells in patients with cutaneous systemic lupus erythematosus (SLE), according to research presented at the 2016 ACR/ARHP Annual Meeting.

The findings were discussed during a session on SLE treatment, drug adherence and the effects of the monoclonal antibody anifrolumab. Experts at the session, Systemic Lupus Erythematosus—Clinical Aspects and Treatment III: Novel and Current Therapies, told attendees that circulating plasmacytoid dendritic cells, the major producers of type 1 interferons, are decreased in lupus, but found in greater numbers in organs affected by the disease. BDCA2 is an inhibitory receptor expressed exclusively on these cells.

In a phase 1 study, researchers enrolled 12 patients with acute, subacute or chronic cutaneous lupus.1 Eight patients received the drug, BIIB059, and four controls received placebo. Researchers found that those who received single doses of the antibody, at 20 mg/kg, had a dampened expression of interferon-responsive genes in the blood and interferon-responsive proteins in the skin, said Richard Furie, MD, the principal investigator and professor of medicine at Hofstra Northwell School of Medicine in Long Island, New York.

In comparison to one in four patients in the placebo group, six of the eight patients who received treatment had at least a four-point reduction in their Cutaneous Lupus Erythematosus Disease Activity and Severity Index (CLASI) score from baseline at Week 4 or Week 12. But Dr. Furie said the patient in the placebo group who responded had a much higher CLASI than the rest of the patient pool at baseline and also received steroids, which could have accounted for the response.

Skin biopsies were evaluated at baseline and at Week 4 for interferon-regulated proteins, and researchers found that an improvement in CLASI scores correlated with a reduction in myxovirus-resistance protein 1, a protein associated with activation of the interferon pathway. The correlation coefficient was 0.78.

Adverse events were balanced between placebo and treatment arms, with only one serious adverse event, which was not related to the drug. No patients withdrew due to adverse events.

“We did see benefit to some patients and the Phase 2 study is just about to start,” Dr. Furie said.

Experts also discussed a separate prospective study conducted at 19 centers across 10 countries in Europe and whose findings show the importance of using multiple ways to assess nonadherence to medication among patients with SLE.2