You are here: Home / Articles / EULAR 2015: Role of ACPA Positivity in Osteoarthritis
Print-Friendly Version / Save PDF 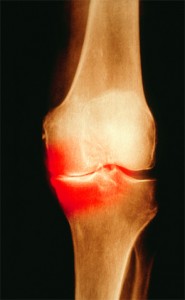 Colored X-ray of the knee of a patient with OA. Patients who test positive for anti-citrullinated protein antibodies show signs of bone erosion before they have clinical signs of arthritis.
Image Credit: Scott Camazine/sciencesource.com

ROME, Italy—The role of ACPA positivity in osteoarthritis is coming more into focus, with results from recent studies by researchers in Germany showing that ACPA positivity apparently works in concert with rheumatoid factor positivity to enhance bone erosion and that ACPA-positive patients show signs of bone erosion before they have clinical signs of arthritis.

The findings were presented at a session during EULAR 2015, the annual congress of the European League Against Rheumatism (EULAR).

Stephanie Finzel, MD, a resident in the rheumatology department at the University of Erlangen and a researcher on several recent studies on the topic, said these latest findings underline the importance of testing for anti-citrullinated protein antibodies (ACPA) positivity.

In one study, the metacarpophalangeal joints (MCPJs) of 242 patients were scanned using high-resolution peripheral quantitative computed tomography (HR-pQCT). Then the number of erosions and their sizes were evaluated in 238 of them.1

A total of 112 patients showed positivity for both ACPAs and rheumatoid factor (RF), 28 were positive only for RF, 29 only for ACPAs and 29 for neither. The number of erosions and their sizes were highest in those both ACPA and RF positive, and the differences were significant in erosion number compared with those who were negative for both (p=0.001) and significant for erosion size compared with those who were ACPA negative (p<0.001).

They also found that RF influenced erosion number and size in patients who were ACPA positive, but not in ACPA-negative patients.

Researchers at the university also scanned the MCPJ of 10 people who were positive for ACPA, but with no signs of arthritis, with HR-pQCT. Ten healthy controls were also scanned, and the results for bone mineral density, cortical thickness and trabecularity were compared.2

The findings showed that it’s possible, with HR-pQCT, to measure bone changes in ACPA-positive patients without clinical signs of RA. Alterations were seen—mainly cortical thinning and fenestration in the cortical area.

Dr. Finzel said they support the idea that bone changes in RA are probably not due exclusively to inflammation and synovitis, but “occur in the phase of breakdown of immune tolerance” and ACPAs have the potential to be pathogenic.

“Bone in early rheumatoid arthritis likely undergoes vehement changes already in the very first weeks after the onset of swelling and pain,” she said. “Highly sensitive diagnostic tools, such as HR-pQCT, MRI or musculoskeletal ultrasound, are required to be able to diagnose correctly and treat early.”