You are here: Home / Articles / Evidence Needed to Support Marijuana Use for Pain Relief in Rheumatologic Conditions
Print-Friendly Version / Save PDF 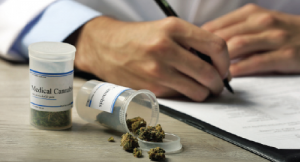 With the chronic pain and other health issues that many rheumatology patients face every day, it’s natural for rheumatologists and their patients to wonder if cannabinoid treatments are of any help. At this point, there is insufficient evidence to recommend cannabinoid treatments to manage rheumatic diseases, according to a review article published in the May issue of Arthritis Care & Research.1

Lead author Mary-Ann Fitzcharles, MBChB, a rheumatologist at McGill University Health Centre, Montreal, Quebec, and colleagues used Medline, Embase and CENTRAL database searches to pinpoint studies that focused on cannabinoid use for pain, sleep, quality of life, tolerability and safety. Although they found 22 potential articles, the final number of studies was narrowed down to only four; the other articles were excluded because they were reviews, they were not randomized controlled trials or they studied other pain conditions.

The four studies included a total of 203 patients—58 with rheumatoid arthritis (RA), 71 with fibromyalgia and 74 with osteoarthritis (OA). One study, from Blake et al in 2006, included 58 patients with RA who received nabiximols or placebo for five weeks.2 Nabiximols are phyto­cannabinoids extracted from cannabis. The study’s main outcome measures were morning pain on movement and at rest, stiffness and sleep quality. Those in the study had improvement in those areas, as well as in their responses to the short form McGill Pain Questionnaire and Disease Activity Score at 28 joints. The only serious adverse events occurred in two patients in the placebo group; otherwise, side effects included dizziness, dry mouth, lightheadedness, nausea and falls.

A second study focused on the use of nabilone 0.5 to 1 mg twice a day or placebo for four weeks of active treatment (followed by four weeks of observation) in 40 patients with fibromyalgia.3 Investigators measured pain improvement as the primary outcome and tender points and Fibromyalgia Impact Questionnaire (FIQ) responses as secondary outcomes. Although there were improved pain and improved responses to the FIQ anxiety and total score, seven patients withdrew from the study, five of whom were in the treatment group. Two patients withdrew for unreported reasons, two for dizziness and disorientation, and one for drowsiness and headache. Common side effects in the study included drowsiness (reported by almost 50% in the active treatment group), dry mouth, vertigo, ataxia and other effects.

A third study also involved fibromyalgia patients (n=31) and nabilone, but this study compared nabilone with amitriptyline over a six-week period.4 Patients received each drug for two weeks, followed by a two-week washout period. The primary outcome was sleep quality. Patients reported improvement with the Insomnia Severity Index but not with other sleep questionnaire measurements. Dizziness, nausea, drowsiness and dry mouth were commonly reported in the nabilone group. There are no studies yet of nabilone in patients with inflammatory rheumatic conditions, OA or soft-tissue rheumatism, Dr. Fitzcharles and fellow authors wrote.