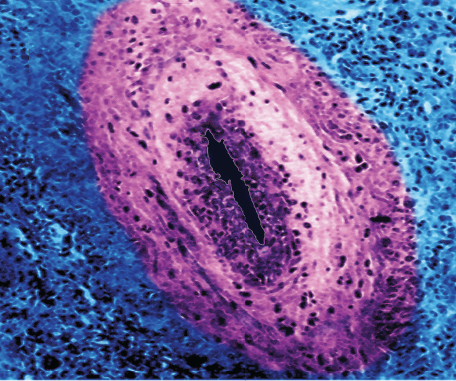 Baltimore—Rheumatologists and meteor­ologists share more in common than you might suspect, said Dr. Rebecca Manno, assistant professor of medicine for the Division of Rheumatology at Johns Hopkins University, Baltimore, and assistant director of the Johns Hopkins Vasculitis Center. At a March 8 meeting of the Maryland Society for the Rheumatic Diseases, Dr. Manno used the weather as an analogy for understanding updates on classification, diagnosis and treatment of giant cell arteritis (GCA) and topics to watch for in the coming year.

“This is an exciting and unprecedented time for GCA,” Dr. Manno said. “There have been incredible advances in the diagnosis and treatment of this potentially devastating disease, and these are directly affecting the lives of patients in a positive way.”

Just as the categorization and naming of hurricanes is important in correctly identifying these phenomena, said Dr. Manno, so too is vasculitis nomenclature. The Revised International Chapel Hill Consensus Conference of 2012 identified GCA as one of two large-vessel vasculitides (the other being Takayasu’s arteritis), yet Dr. Manno pointed out that a large-vessel vasculitis, such as GCA, can also affect medium and small arteries. The term temporal arteritis, which is often used interchangeably with GCA, can be misleading both because other vasculitides, such as polyarteritis nodosa, can affect the temporal arteries and because exclusive large-vessel involvement may be seen in GCA even when temporal artery involvement is scant or absent.

Dr. Manno noted that, similar to how meteorological imaging used to characterize weather events has greatly advanced in recent years, magnetic resonance imaging (MRI) and positron emission tomography/computed tomography (PET/CT) represent a new frontier in GCA diagnostics. Conventional and CT angiography can assist in the diagnosis of large-vessel GCA, but MRI/ magnetic resonance angiography (MRA) is a non-invasive procedure that does not expose patients to radiation and can identify manifestations, such as aortitis or subclavian stenosis, that may have important implications for the patient. MRI/MRA may be of particular utility when the clinical history is consistent with GCA but the temporal artery biopsy is negative, although Dr. Manno cautioned that artifacts in MRA with contrast, such as subclavian pseudostenosis (which is a mimic of stenosis due to focal irregularity of the subclavian artery from residual contrast remaining in the adjacent vein), can confound the picture. PET/CT is another technique that can identify large-vessel vasculitis by demonstrating FDG avidity in blood vessels, thereby potentially indicating active disease.

Just as meteorologists use their technological tools to try to predict future weather patterns, rheumatologists are increasingly investigating how imaging can be used as a biomarker of GCA disease activity. Grayson and colleagues have conducted a study in 56 patients with large-vessel vasculitis and 59 comparator subjects (individuals with hyperlipidemia, diseases that mimic large-vessel vasculitis and healthy controls) in which FDG-PET imaging studies were conducted at six-month intervals.1 This study demonstrated that a qualitative summary score based on global arterial FDG uptake could be used to predict clinical relapse over a median follow-up period of 15 months. Such a finding is very helpful to the rheumatologist seeking to forecast which GCA patients may flare over time.

Interestingly, FDG-PET scans were interpreted as showing active disease in 41 of 71 large-vessel vasculitis patients in clinical remission, perhaps indicating that this modality can show subclinical phenomena not readily apparent to the clinician at the bedside.

The topic of GCA is not without rain and thunderstorms, and unfortunate adverse outcomes exist that rheumatologists should think about routinely. Among these are infections, venous thrombosis and blindness. The risk of infection is greatest for patients in the first six to 12 months after diagnosis, and risk factors for infection include advanced age, diabetes and dose and duration of corticosteroid therapy.

Venous thromboembolism has been reported in up to 6% of GCA patients in some studies, with a five-month median duration between GCA diagnosis and thromboembolic event, and a median prednisone dose of 17 mg/day at the time of the event. The potential for blindness is perhaps the best known and most feared complication in GCA. Yates and colleagues compared 34 GCA patients who developed blindness at six months with 399 who did not develop blindness at six months and found peripheral vascular disease, diabetes and history of stroke at a statistically significantly higher prevalence in the former than in the latter group.2

In closing the talk, Dr. Manno discussed the reason rheumatologists should see rays of sunshine through the clouds. She was referring to the Giant-Cell Arteritis Actemra (GiACTA) trial, published this past year in the New England Journal of Medicine.3

The primary outcome—sustained steroid-free remission at 52 weeks—was achieved in significantly more patients treated with tocilizumab (56% and 53% for groups 1 and 2, respectively) than in those treated with placebo (14% and 18% for groups 3 and 4, respectively). In addition, the patients receiving tocilizumab required significantly less prednisone than patients in the placebo groups, and the number of adverse events was similar across all groups. This study indicates that tocilizumab is a new potential treatment for GCA—after decades of a paucity of options beyond corticosteroids.

Dr. Manno’s update on GCA helped shed light on this interesting condition and showed that, although patients may experience stormy weather when being evaluated and treated for this condition, new research on diagnosis and treatment indicate blue skies on the horizon for our understanding of the disease.