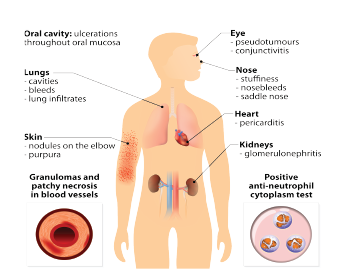 A recent study in Arthritis & Rheumatology highlights new information about the epidemiology and disease course of the vasculitic disease granulomatosis with polyangiitis (GPA, formerly known as Wegener’s disease).1 GPA is a rare disease that’s generally specific to the lungs, kidneys and the upper airways. The study provides key new data about the incidence and prevalence of the disease in the U.S. It also sheds light on disease course and outcomes.

Information about GPA has been particularly limited for pediatric populations. Due to its relative rarity in children, much less has been known about the disease in this group, with studies limited to small cohorts. Earlier, smaller cohort studies had indicated potential differences in disease course and complication rates for pediatric versus adult populations.1

Andrew J. White, MD, is the emeritus director of the division of pediatric rheuma­tology and the James P. Keating, MD, professor of pediatrics at Washington University in St. Louis, and one of the co-authors of the recent paper. Dr. White and his colleagues utilized a large private insurance claims data set of more than 99 million individuals to retrospectively characterize pediatric and adult GPA patients in the U.S. from 2006–2014. Patients were identified by medical claims forms using the diagnostic code for GPA.1 According to Dr. White, the research included data coded from both inpatient and outpatient encounters. “That’s different than a lot of these types of studies,” he says.

The researchers also studied complication rates. Both children and working-age adults had high rates of hospitalizations and severe infections. “We found that the most common complications were being hospitalized, having a severe infection and having hematologic abnormalities such as cytopenias,” says Dr. White. “We found that hospitalizations were a little more common in children. Of the severe infections, they were mostly of the respiratory tract—pneumonias. The hematologic complications were more common in children than adults as well.” In fact, children had two to three times higher rates of leukopenia, neutropenia and hypogammaglobulinemia. Pulmonary infections occurred at a rate of approximately 50 infections per 1,000 person-years in both groups.1