You are here: Home / Articles / Hope for Live Births in Women with Antiphospholipid Syndrome
Print-Friendly Version / Save PDF 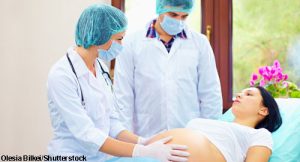 Women with antiphospholipid syndrome (APS) frequently experience obstetric complications, including recurrent pregnancy loss. Typically, women with the persistent presence of antiphospholipid antibodies and a history of thrombosis, and/or recurrent miscarriage, are given thromboprophylaxis during pregnancy in addition to aspirin. Treatment can take the form of antepartum administration of prophylactic- or intermediate-dose unfractionated heparin, or prophylactic-dosed, low-molecular-weight heparin combined with aspirin. However, this current clinical practice is based on limited published evidence.

A recent Cochrane Review evaluated the role of aspirin and/or heparin in improving pregnancy outcomes in APS patients. The review included women who had experienced more than one unexplained fetal death after 10 or more weeks of gestation, one or more premature delivery before 34 weeks of gestation due to severe pre-eclampsia. Placental insufficiency and three unexplained consecutive miscarriages before 10 weeks of gestation were also characterized as recurrent pregnancy loss due to APS.

The review found that for women with persistent anti­phospholipid antibodies, the combination of low-molecular-weight heparin and aspirin during pregnancy—as opposed to aspirin treatment alone—may increase live birth rate. Eva N. Hamulyák, MD, PhD candidate, at the University of Amsterdam, The Netherlands, and colleagues performed a meta-analysis and found that one large study comparing low-molecular-weight heparin plus aspirin to aspirin alone drove the observed benefit of heparin. The review, published in the May issue of Cochrane Database of Systematic Reviews, also found adverse events were not frequently, or not uniformly, reported in the included studies.1

The authors identified 11 trials that met their predefined inclusion criteria. Although only two of the trials were blinded for treatment, they assessed all the trials as being low risk for performance bias because live birth is an unequivocal outcome unlikely to be affected by treatment allocation. However, only three of the trials adhered to the time frame of at least 12 weeks between antiphospholipid antibody tests, and the antibody cut-off levels differed greatly between trials.

None of the trials included in the systemic review had a treatment comparator arm. Thus, the review was unable to determine if aspirin alone affected live birth rate relative to placebo. Instead, the results indicate the combination of heparin, started after a positive pregnancy test, plus aspirin may slightly improve live birth rates compared with aspirin alone. The authors were unable to conclude that aspirin alone or heparin plus aspirin had any effect on the risk of pre-eclampsia, preterm delivery of a live infant, intra-uterine growth restriction or adverse events in the mother or child.