You are here: Home / Articles / How to Watch for Immune Deficiencies & Manage Risk
Print-Friendly Version / Save PDF

CHICAGO—When a patient with rheumatic disease suffers recurrent infections, has a history of multiple autoimmune diseases or presents with atypical autoimmune syndromes, clinicians should consider the possibility of an immune deficiency, an expert said at the ACR State-of-the-Art Clinical Symposium in April.

W. Winn Chatham, MD, professor of medicine at the University of Alabama at Birmingham School of Medicine, said immune deficiency is frequently coupled with rheumatic disease. Patients with the most often seen form, common variable immune deficiency (CVID), have an autoimmune disorder 20–25% of the time, so clinicians must be aware of the signs and know how to manage it.

The atypical autoimmune syndromes often can’t be attributed to a specific rheumatologic diagnosis, he said. “Most notably, you see this a lot with patients who have seronegative RA,” Dr. Chatham said.

Immunodeficiency may develop in the setting of autoimmune disease because therapy (e.g., cyclophosphamide or azathioprine) induces neutropenia or lymphopenia. Patients can also have primary immunodeficiency, which can arise from autoimmunity that affects the numbers or functions of lymphoid and phagocytic cells, he said. 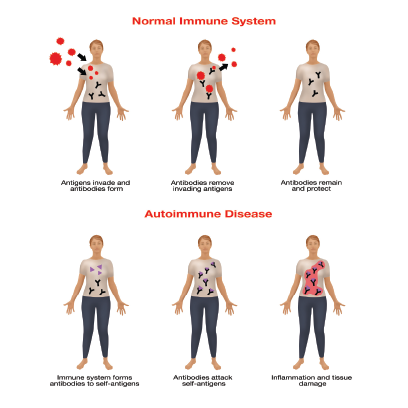 Physicians can manage severe neutropenia with levofloxacin, low T lymphocytes with trimethoprim-sulfamethaxazole or dapsone, and low IgG counts with IVIG.

A low serum IgG level is an often overlooked sign, he said. “This is one I see that even [clinicians] in our own group, as well as other people in practice using aggressive therapies, probably don’t monitor quite often enough,” he said. “It is also important to remember to check immunoglobulin levels any time you see a patient with new-onset autoimmune disease. It really should be part of the diagnostic evaluation, I think.”

To assess for primary immune deficiency, clinicians can measure IgG and IgG subclass levels, check to see if pneumococcal IgG responses are robust after pneumococcal vaccination or order flow cytometry studies to measure circulating B and T cell levels.

“If you get a hit on these with a noted abnormality and suspect a patient has an underlying immune deficiency, genetic testing is actually getting quite reasonable now, quite affordable,” he said. A primary immunodeficiency gene panel can be ordered for a couple of hundred dollars, he said.

CVID, the most common form of immune deficiency except for selective IgA deficiency, usually presents either early between 1 and 5 years old, or later between the ages of 18 and 25, but in some patients, it may not be recognized until their fourth or fifth decade, Dr. Chatham said. It most commonly manifests with frequent respiratory tract infections, bronchiectasis and lymphocytic interstitial lung disease, and/or granulomatous lesions that can affect any organ.

Dr. Chatham cautioned that the pathology of these lesions is indistinguishable from sarcoidosis, but that active sarcoidosis is usually associated with hypergammaglobulinemia. “If you don’t see high IgG levels in that setting, it might be CVID,” he said.

Dr. Chatham suggested using a rule of 500s to mitigate the risk of immune deficiencies associated with immunosuppressive treatment.

The diagnostic assessment for CVID involves trying to exclude other primary immune deficiencies by looking at B and T cell subsets and by genetic testing, although no abnormalities have been identified in a majority of CVID patients.

The most telling sign is an IgG count below 650 mg/dL, but Dr. Chatham said this assessment can be tricky, in part because chronic immunosuppression or corticosteroid use can also lower IgG levels. However, in such settings pneumococcal vaccine responses should remain intact. Clinicians should also be aware that patients with a normal IgG range could still have subclass deficiencies.

CVID patients with lupus or Sjögren’s syndrome—diseases typically linked with hypergammaglobulinemia—could have IgG levels in the normal or low-normal range, he cautioned.

“The take-home message here is to consider CVID in a lupus patient with normal or low-normal IgG levels who has a relevant infection history,” he said, “and if they happen to be in [a] particular Caucasian demographic.” Scottish, north English and Irish people are disproportionately affected, he said.

Clinicians managing CVID should try to adjust the dosing of immunosuppressive therapy affecting phagocytic cell functions as disease activity allows. And they can use IVIG and antibiotics as preventive interventions, he said.

“You want to use therapeutic approaches that are the least likely to compromise phagocytic cell functions. So if you have a patient with classic RA, for example, who happens to have CVID, rather than put that patient on a TNF inhibitor, you might want to consider something that doesn’t impair phagocytic cell function, such as rituximab.”