You are here: Home / Articles / Joan M. Von Feldt, MD, MSEd: A Shopper with a Cause
Print-Friendly Version / Save PDF 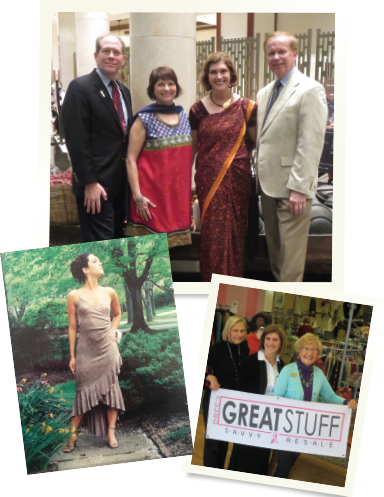 Top: Dr. Von Feldt and her husband (right), along with David and Corinne Karp, on their way to a gala for the Indian Rheumatology Association meeting in Kochi, India.
Bottom left: Dr. Von Feldt’s daughter, Christine, in her prom dress.
Bottom right: Dr. Von Feldt at Great Stuff, with volunteers Kathy and Bonnie.

Joan M. Von Feldt, MD, MSEd, loves fashion—everything from the feel of natural fabrics and the fit of a well-crafted garment to mixing and matching colors and textures.

As a professor of medicine at the University of Pennsylvania and editor in chief of the Journal of Clinical Rheumatology, she enjoys being well dressed and, like most people, finding a good bargain. But she’s not a snob about where she shops. She’s just as comfortable scouring the racks at Nordstrom as she is bargain hunting at flea markets.

Among her favorite ways to shop is by combining both of her passions—fashion and medicine. Dr. Von Feldt explains that some resale or thrift stores near her home in Wilmington, Del., donate their profits to local hospitals or causes like the Delaware Breast Cancer Coalition. Roughly one-third of her eclectic wardrobe comes from such shops, and she encourages people to patronize stores that do more than earn a profit.

After graduating from the Medical College of Pennsylvania in 1981, Dr. Von Feldt spent the next three years completing her internship and residency in internal medicine at Wilmington Medical Center.

She then worked at a community health center in Winter Park, Fla., which was supported by the National Health Service Corp. Her experiences at the center contributed to her growing interest in rheumatology.

“I cared for a number of women who were migrant workers or local residents who worked in the orange groves and had autoimmune disease,” recalls Dr. Von Feldt. “I went into rheumatology because I like taking care of women. I like immunology, and I enjoy taking care of [patients with] complex diseases, such as lupus.”

She completed her fellowship in rheumatology at the University of Pennsylvania between 1988 and 1990 and has remained at the university to this day—30 years later.

In 2005, she also received her Master of Education from the University of Pennsylvania, with help from a career development award—the Clinician Scholar Educator—from the Rheumatology Research Foundation.

“It wasn’t easy going back to school, working full time and having demanding teenagers at home,” she says, adding that she was grateful for the opportunity to advance her career.

Dr. Von Feldt learned about shopping from her mother, who was an avid bargain shopper.