You are here: Home / Articles / How to Manage Patients with Giant Cell Arteritis and Polymyalgia Rheumatica
Print-Friendly Version / Save PDF 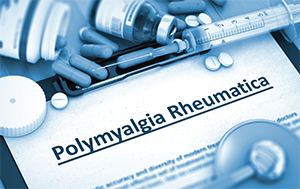 WASHINGTON, D.C.—From diagnosis questions to infection risk to treatment decisions, handling giant cell arteritis (GCA) and polymyalgia rheumatica (PMR) comes with a range of challenges for clinicians. Speaking in the ACR Review Course at the 2016 ACR/ARHP Annual Meeting, an expert—Rebecca Manno, MD, MHS, assistant professor of medicine in rheumatology at Johns Hopkins, as well as a fan of boating—likened the challenges to those faced by a boater: You have to remember to call things by the right name (definitions and classification criteria); beware of submerged objects (such as large-vessel vasculitis); be prepared for storms (venous thrombosis, infections and challenges with temporal artery biopsy); and use the right tools (therapies).

GCA, a systemic vasculitis of medium and large arteritis, is the most common form of vasculitis in Europe and North America. It affects women more than men, and older age and genetics are key risk factors. PMR, an inflammatory syndrome that targets the shoulder and hip girdle region, has similar demographics as GCA.

The ACR classification criteria for GCA are 50 or older at onset; new headache; ESR of 50 mm/hour or higher; and abnormal temporal artery biopsy. They’ve been found to have 93.5% sensitivity and 91.2% specificity for GCA.

Provisional classification criteria for PMR, developed in 2012, are age 50 or older; bilateral shoulder aching and abnormal ESR or CRP plus morning stiffness of more than 45 minutes (2 points); hip pain or limited range of motion (1 point); absence of rheumatoid factor ACPA (2 points); and absence of other joint pain (1 point).

A score of 4 or greater has been found to have a sensitivity of just 68% and a specificity of 78%.

“The addition of ultrasound improved the specificity of these criteria,” Dr. Manno said. “However, it did not distinguish PMR [from] rheumatoid arthritis (RA).” She added that ultrasound was “very good” at identifying non-RA shoulder conditions and at discerning whether any shoulder condition was present at all.

A rapid response to steroids was not included in those criteria, but it still may be telling, she said.

“When you’re treating a patient, the lack of response to steroids may be a clue that you want to reclassify that patient as not having PMR,” she said.

Watching Out for Large-Vessel Vasculitis

A recent study comparing cranial GCA and large-vessel GCA found that patients with large-vessel GCA were older, had a longer time to diagnosis, were more likely to have a history of PMR, were far more likely (52 cases to 0) to have upper extremity claudication and were far less likely (95 to 32) to meet 3 or more of the ACR criteria for GCA.

Risks for large-vessel involvement for those with cranial GCA include smoking, bruits at diagnosis and transient ischemic attack before the GCA diagnosis.

The left subclavian artery is the most high-yield vessel to examine when there’s suspicion of large-vessel GCA, Dr. Manno said.

“In patients with vascular risk factors such as coronary artery disease, hypertension or aortic murmurs, this maybe a high-yield population to follow longitudinally for large-vessel complications,” she said.

Other Problems That Can Arise

Venous thrombosis is “not uncommon” in GCA, with the greatest risk at a year after diagnosis, then tapering but remaining a significant risk compared to those without GCA, she said.1

The risk of infection in GCA is greatest in the first six to 12 months after diagnosis, and GCA patients are more likely to have septic shock and gastrointestinal infections, such as colitis. Risk factors for infections are older age and diabetes. Pneumocystis jiroveci infection is rare—a 1–6% incidence—but preventable.

Temporal artery biopsy is the gold standard for a GCA diagnosis, but there is always a risk of a “dreaded false negative,” Dr. Manno said. To minimize this risk, samples should be 1.5 cm to 3 cm, and should be done as soon as possible because treatment with steroids can influence the findings.

“In general, the highest yield seems to be a two-week window after you start treatment,” she said.

In cases in which the size of the sample was not adequate, a biopsy of the other side might be needed, she said.

Could imaging be a good alternative? Ultrasound of the temporal artery has its problems—it’s highly operator dependent and the studies testing its value are heterogeneous, Dr. Manno said. Meta-analyses have found its sensitivity to be 75% and 68%, and its specificity to be 83% and 91%.2,3

MRI, she said, while showing “great promise” in this area, is expensive, exposes patients to gadolinium, and its availability can be limited.

Glucocorticoids are the mainstay treatment for both GCA and PMR, but methotrexate can play a role; it has been found to lower relapse risk and steroid use.

“The ACR/EULAR guidelines were very careful not to make the universal recommendation for methotrexate but encourage very careful consideration for an individual high-risk patient,” she said. “To me, a high-risk patient would be a poorly controlled diabetic who is obese and has disordered sleep. … I would think about methotrexate for that patient.” She also would consider it in a patient with a high ESR and frequent relapses, who would require repeated increases in their steroid dose.

“We are desperate for steroid-sparing therapies in GCA and PMR,” she said.

Clinicians also shouldn’t forget about the importance of exercise.

“We’ve all seen what happens to our patients on high-dose steroids,” she said. “They lose muscle. They gain fat, they are weak, fatigued and tired. So early prescription of an exercise program for strengthening and fall prevention is important for GCA and PMR.”