Research shows that patients with RA are living longer.

Recent data from a study presented at the British Society of Rheumatology (BSR) meeting showed a dramatic increase in life expectancy in patients with RA over the past 25 years in the United Kingdom.1

According to lead author of the study, Sam Norton, PhD, Psychology Department, Institute of Psychiatry King’s College London, U.K., who presented the findings at the April meeting, the study found that the life expectancy for people with RA in the U.K. has increased by about 10 years over the past 25 years, similar to that seen in the general population.

The study used outcomes data from two prospective observational cohort studies of patients not treated by disease-modifying antirheumatic drugs (DMARDs) at the time of study enrollment: the Early Rheumatoid Arthritis Study (ERAS), which recruited 1,460 patients between 1986 and 1998, and the Early Rheumatoid Arthritis Network (ERAN), which recruited 1,252 patients between 2002 and 2012.

The study found a significant association between the year of symptom onset and risk of all-cause mortality risk, with a hazard ratio of 0.96 (95% confidence interval [CI], 0.95–0.98). This represented a 3.5% reduction in the relative hazard of death from any cause per year, and translated to an increasing median age at death from 76.7 years in 1986 to 86.7 years in 2012. 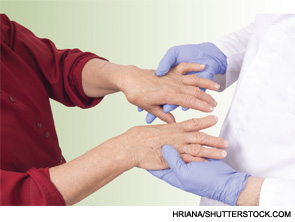