You are here: Home / Articles / Mosquito-Borne Chikungunya Virus Can Cause Long-Term Arthritis
Print-Friendly Version / Save PDF 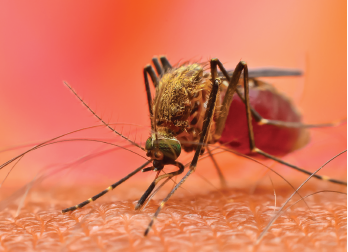 Chikungunya is among a group of 16 diseases transmitted through mosquito, tick or flea bites that is of increasing public health concern in the U.S. Although few rheumatologists are likely to diagnose patients with the acute phase of the disease, they may encounter a handful of patients each year who complain of persistent, and often debilitating, arthritis months and even years after a one- to two-week bout of fever, rash and joint pain following travel to a chikungunya-endemic country.

The Centers for Disease Control & Prevention reports that chikungunya virus (CHIKV) disease, transmitted by the Aedes albopictus and Aedes aegypti mosquitoes, became a nationally notifiable condition in 2015. The mosquito-

borne virus, found in Africa, Asia and the Indian and Pacific Ocean regions since the mid-2000s, was first observed in the Caribbean basin in 2013. Puerto Rico’s first CHIKV epidemic peaked in 2014. By January 2018, 114 cases with illness onset in 2017 had been reported from 26 states, and all were from travelers returning from affected areas. Thirty-six locally acquired cases were reported in Puerto Rico in 2017.

Epidemics of the virus point to the need for rheumatologists to raise their awareness about the symptoms, diagnosis and management of a disease that, although still uncommon, will likely increase in this country. “People are flying to endemic areas, and just about half the world is endemic for chikungunya,” says Aileen Chang, MD, MSPH, assistant professor of medicine at The George Washington University, Washington, D.C.

Because of the severity of arthritic disease caused by CHIKV, health officials in countries where outbreaks have occurred since 2006 are taking steps to develop guidelines to tackle the pathogen, according to a multidisciplinary review article in the April 2018 issue of Arthritis & Rheumatology that focuses on implications of acute and chronic inflammation mechanisms in disease management.1

“[Although] there are key differences in the disease mechanisms of rheumatoid arthritis and chikungunya virus arthritis, the similarities found can inform future therapeutic approaches,” says Suresh Mahalingam, PhD, an author of the review and professor of viral immunology and inflammation, and principal research leader and head of the Emerging Viruses and Inflammation Research Group at Griffith University in Queensland, Australia. The multidisciplinary review brought together the perspectives of experts from the fields of epidemiology, clinical medicine and viral immunology.

Dr. Mahalingam and colleagues provide a broad perspective on current information about the virus, including the risk factors for people developing chronic chikungunya arthritis after the acute phase has passed. Age is one factor, with patients 45 years or older potentially exhibiting more severe signs of the disease. A high viral load during the acute phase of the disease (>109/mL) and duration and severity of acute illness are also likely risk factors, he says.

“[Although] a high viral load, which may be evidenced by an intense antiviral response, remains to be confirmed as a definite risk factor, population-based studies have shown the aforementioned factors can be used to estimate the degree of severity and duration of chikungunya disease,” Dr. Mahalingam says. Other proposed risk factors, such as female gender and comorbidities, including preexisting rheumatic disease, have not been confirmed.

Complicating the diagnosis for physicians evaluating a patient with chronic symptoms is that “even though anti-CHIKV IgG [immunoglobulin G] antibody levels in the acute phase and the persistence of IgM antibodies appear to be associated with disease activity and harbinger of poor rheumatologic outcome from sparse individual reports, there is no specific biological marker for assessing chronic disease associated with CHIKV infection,” says Dr. Mahalingam.

Dr. Chang and colleagues looked at the frequency of chronic joint pain following CHIKV infection in a prospective cohort of 500 patients in Colombia who were clinically diagnosed during the 2014–2015 epidemic. Their research, also published in Arthritis & Rheumatology in April, is the largest observational study in Latin America to describe the incidence of long-term arthritic symptoms after chikungunya infection.2

The study found that 25% of the 485 patients who had serologically confirmed chikungunya infection had persistent joint pain about 20 months later. They were more likely to have had more severe initial symptoms and to suffer greater joint involvement, including the number of joints involved and a duration of initial joint pain of four weeks or longer. They were more likely to report having missed work or school, and to report their normal activities had been affected by the infection. In this study, development of chikungunya arthritis was not related to older age or female gender.

“Returning travelers from these areas may have fever, rash and joint pain, but they often do not make it to the rheumatologist until they have been suffering with arthritic disease for more than a year,” says Dr. Chang. “It is important that the rheumatologist question the patient about when their symptoms first started and whether the initial symptoms were accompanied by fever, rash and travel to an endemic area.

“I think we are probably missing this diagnosis frequently because we are not used to seeing it. Explosive outbreaks continue in the Americas, with a most recent outbreak occurring in Brazil. This would be a good time to keep track of your Brazilian patients who are coming back with joint pain,” she advises.

The assumption has been that people infected with chikungunya virus will have an acute infection, followed by symptoms that may last for a few months and then go away, Dr. Chang explains. “The striking thing we are seeing is that patients are describing these persistent symptoms. There have been suggestions that the patients have developed osteoarthritis in the meantime or some other related arthritis, but when you talk to the patients it is quite striking. They tell you that they have pain in specific joints where they never had problems before they got chikungunya.”

Dr. Chang and colleagues have studied whether CHIKV persists in the synovial fluid of patients after infection, which could act as a causative mechanism of persistent arthritis. Their cross-sectional study, published in Arthritis & Rheumatology in April, included 38 Colombian patients who had confirmed chikungunya virus infection during the same epidemic and had chronic arthritic symptoms.3 The control group included 10 people in the same locations who had not been diagnosed with the disease.

“The other option, which is probably more likely, is that the chikungunya virus has been cleared from the joint, but the patients are now experiencing an immune response to chikungunya and have arthritis caused by this immune response,” she says. “There does not yet appear to be a definitive mechanism for why patients two to three years later complain of persistent arthritis in the absence of virus there.”

According to Dr. Mahalingam and colleagues, research has been unable to isolate infectious virus from tissue or sera in mouse models and human studies. Human studies have demonstrated high levels of CHIKV-specific IgM up to 180 days in patients with no preexisting musculoskeletal disease prior to infection, suggesting that persistence of viral antigens could contribute to development of chronic chikungunya arthritis, “but the underlying molecular mechanisms are still unknown, and a statistical association between persistent CHIKV-specific IgM and chronic arthralgia has not been established.”

No standard of care guidance exists in the U.S. for treating the disease. Some patients are treated with immunomodulating medications, such as methotrexate, sulfasalazine, disease-modifying anti-rheumatic drugs (DMARDs) and tumor necrosis factor (TNF) alpha inhibitors, despite ongoing concern that such agents could prove harmful when a virus is replicating in the synovium and potentially facilitate reemergence of a systemic viral infection, although no such cases have yet been reported, Dr. Chang notes.

“Given our findings in the largest cohort study thus far for analysis of synovial fluid, it would indicate that most likely it would probably be safe to treat chikungunya arthritis with antirheumatic immunomodulating medications two years after infection, which is the standard of care in the French guidelines,”5 Dr. Chang says. Some physicians have prescribed these agents, but a rheumatologist who has experience with only a handful of patients with chikungunya arthritis “may feel a bit intimidated about using them because we don’t yet understand the pathophysiology. Our findings would indicate there is some justification for rheumatologists who may want to try these medications but have been worried about systemic viral dissemination,” she says.

Dr. Mahalingam and colleagues say that in the absence of national guidelines, practicing rheumatologists “may … consider an early switch to DMARDs from the eighth week after the onset of infection—to be discontinued after several months of disease inactivity monitored on serial DAS28 scale measurements.” The researchers recommend that biologics be reserved for cases with evidenced refractory synovitis “as a conservative option when conventional synthetic DMARDs are not sufficient. No experimental antiviral drugs targeting viral replication (or host factors) have yet been tested in clinical trials.”

They highlight the need for multidisciplinary management of chronic CHIKV disease, with practicing rheumatologists joining with a pain specialist, a physiotherapist and even a neurologist or psychiatrist as needed. Additionally, morphological assessment (designed to evaluate the fulfillment of current criteria for rheumatoid arthritis or spondyloarthritis) and laboratory tests are generally performed to confirm the diagnosis and screen for evidence of inflammatory rheumatic disorders or other destructive mechanisms.

More research about the molecular mechanisms tied to chronic disease is needed, as well as guidance on treatment of patients who can suffer debilitating symptoms years after initial infection. “The medications we are using to treat chikungunya arthritis are empiric anti-inflammatory immunomodulating medications without truly understanding the mechanism whereby chikungunya causes arthritis,” says Dr. Chang.

Kathy Holliman, MEd, has been a medical writer and editor since 1997.