The implementation of a bundle of quality measures for rheumatoid arthritis (RA) helped identify gaps in care delivery, and another quality improvement study resulted in increased safety of intravenous infusions at a pediatric rheumatology practice. These abstracts were among six presented at a session titled, “Quality Measures and Innovations in Practice Management and Care Delivery I,” here at the 2011 ACR/ARHP Annual Scientific Meeting in Chicago in November. [Editor’s note: First session (Walker) was recorded and is available via ACR SessionSelect at www.rheumatology.org.]

Chad P. Walker, DO, a second-year rheumatology fellow at Geisinger Medical Center in Danville, Pa., presented the results of implementing an RA quality-measure bundle that focused on improving disease activity, medication safety, and comorbid hyperlipidemia in nearly 1,700 patients with RA. He defined a quality bundle as “different care processes and protocols.” Rheumatologists at Geisinger agreed to be held accountable for the selected quality measures.

By systematically and electronically capturing both physician and patient data and subsequently studying the measures, Dr. Walker and his team identified gaps in care. “We have to start rethinking how we deliver care and understand the importance of quality,” he said.

The Geisinger team tracked not just the percentage of patients receiving a disease-modifying antirheumatic drug but also the percentage of these patients whose RA was at low disease activity. They used the Clinical Disease Activity Index to assess disease activity, with a score of less than 10 considered low activity. Fewer than 30% of patients met that stringent metric, which Dr. Walker says indicates room for improvement.

Additionally, the researchers measured the percentage of patients older than 45 years who had their low-density lipoprotein (LDL) cholesterol checked within the previous five years. They also calculated the percentage of those patients whose LDL level met the nationwide recommendation of less than 130 mg/dL. Only 78% of patients who needed cholesterol screening met this goal, although 92% of the applicable cohort had an LDL test, said Dr. Walker.

At Cincinnati Children’s Hospital Medical Center, an accidental medication error during an intravenous infusion was a precursor event that was “capable of inciting change on an organizational level,” according to presenter Pai-Yue (“Patty”) Lu, MD, a pediatric rheumatology fellow there. “This event occurred while initiatives to improve the safe delivery of intravenous infusions were ongoing, and reinforced the need to step up interventions,” she said.

The investigators found that last-minute scheduling was the greatest contributor to scheduling errors, and it was one of the errors involved in the precursor event. That patient apparently received an incorrect medication, for which there was a standing order with no expiration date. “Fortunately, the patient did not experience any significant or lasting harm,” said Dr. Lu.

She stated that their goal at the medical center is to achieve a 0% error rate on all intravenous infusions by May 2012. They are attempting to reach this goal by analyzing system failures and improving work processes, including standardizing order sets and implementing provider checklists for infusions.

The hospital now has a standard 90-day expiration date for signed and held orders and is improving its computer order-entry system. Although they need to computerize steps of the protocol to improve reliability of the process, Dr. Lu told The Rheumatologist that they also are involving people to make the system adaptable. They plan to involve parents more by giving them information to help keep track of their children’s infusions, she said.

Since the ACR issued its “2010 Recommendations for the Prevention and Treatment of Glucocorticoid-Induced Osteoporosis,” researchers have shown that adherence to one of these recommendations is poor, said Minna J. Kohler, MD, who presented the results of a study to improve care providers’ adherence. The intervention focused on the ACR’s recommendation for calcium and vitamin D supplementation for patients receiving “any dose or duration” of glucocorticoid therapy.

Dr. Kohler conducted the research while at Veterans Affairs Connecticut Healthcare System and Yale University School of Medicine in New Haven. Dr. Kohler is now with Massachusetts General Hospital in Boston as director of the rheumatology unit’s Musculoskeletal Ultrasound Program.

The researchers designed a computerized prescription order set that automatically prescribes calcium and vitamin D each time a provider orders oral glucocorticoid treatment lasting two weeks or longer. After the intervention, the percentage of coprescriptions for calcium and vitamin D increased significantly (P<.0001 each). However, the postintervention adherence rate was only about 50%. “We had expected more of an increase,” said Dr. Kohler.

They found that a major barrier to better adherence was the lack of awareness by primary-care physicians, who were the most frequent prescribers of glucocorticoid medications in the study. “Some providers said they were unaware of any evidence supporting the ACR recommendation [for calcium and vitamin D supplementation] for any duration of glucocorticoid use,” she said.

“Of those I interviewed, many providers said if the patient was on glucocorticoids more than three months or more than six months, they would be more likely to give a coprescription.”

Dr. Kohler called for more education of primary-care providers regarding this important recommendation.

Electronic health records do not provide all the information that rheumatologists need, contends Eric D. Newman, MD, director of rheumatology at Geisinger Medical Center in Danville, Pa. Therefore, he and his coworkers designed and studied implementation of a visual display software program that allowed them to collect the objective information they need (see Figure 1). Called Rheum-PACER (for Patient-Centric Electronic Redesign), the web-based software uses a touchscreen questionnaire to collect information, such as demographics, from patients. An instant nurse messaging system—a novel feature, according to Dr. Newman—allows nurses to track the patient’s progress and assist if needed. The software assembles the information from the patient, nurse, physician, and health record.

When the physician examines the patient and enters data, such as symptoms and disease activity, into the program, the software gives results in real time. It also creates a clinic note and moves it into the electronic medical record, and allows printing of an after-visit summary for the patient. A two-year study showed an 86% adoption rate of the software among physicians, said Dr. Newman. More than 1,400 patients with RA participated in the study. For those patient visits, the new program significantly increased provider productivity, measured by relative value units, and net revenue rose by 26% for each visit (P =.03 each).

The software is not yet commercially available, said Dr. Newman. Other presentations included using electronic health records to generate run charts that help monitor performance in treating various rheumatologic diseases at Cincinnati Children’s Hospital. A quality-improvement project from Nationwide Children’s Hospital in Columbus, Ohio, also improved the electronic patient record. To increase the influenza vaccination rates in pediatric rheumatology clinics, the researchers added a best-practice alert about vaccination that providers saw on a pop-up screen whenever they signed orders. The investigators reportedly more than tripled the rate of influenza immunization in two years. 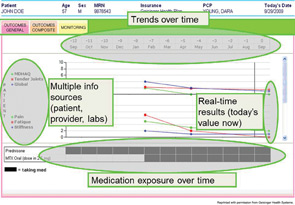 Session comoderator Jinoos Yazdany, MD, MPH, assistant professor of medicine at the University of California, San Francisco, and a member of the ACR Quality Measurement White Paper Development Workgroup, told The Rheumatologist she was excited that the researchers applied to their real-world settings some of the quality measures that the ACR has endorsed. “At this session, we saw rheumatologists applying data and innovations in health information technology to drive quality improvement at their institutions, with significant impact,” she said. “It is very likely that some of the successful measures-development and implementation projects performed by rheumatologists in their own communities will help inform what we do at the ACR at the national level.”

Kathleen Louden is a medical writer based in the Chicago area.