David S. Pisetsky, MD, PhD, often tells people that science involves reading and writing as much as conducting experiments. No matter what discoveries are made in the lab, if they can’t be communicated well or put into context, he asks, how can they be used to advance the field and benefit patients?

The recipient of the ACR’s Presidential Gold Medal award in 2016, Dr. Pisetsky is an academic physician. Since he was hired in 1978, he has held numerous positions at Duke University Medical Center, Durham, N.C.: Since 1990, he has served as pro­fessor of medicine; in 1994, he became a professor of immunology; and in 2019, he was named associate vice chair of academic affairs in the Department of Medicine. In 1978, he was also hired as a staff physician in the section of rheumatology at Durham VA Hospital, North Carolina.

Like many accomplished physicians, Dr. Pisetsky has written a great deal—approx­imately 400 papers, articles and chap­ters related to medicine. He also authored The Duke University Book of Arthritis, which is still available on Amazon almost 30 years after it was first published.

In 2006, he was named the first editor of The Rheumatologist and served in this role for five years, writing a column every month.

Over the years, Dr. Pisetsky has written many creative nonfiction or narrative nonfiction essays and short stories, using fictional techniques to describe real-life events. Some of his pieces have been published in the Annals of Internal Medicine and JAMA. More recently, he was a columnist for Durham Magazine, writing about such topics as town-gown relationships, yard signs, the Duke Gardens and the Durham Christmas parade.

It seems there are few, if any, topics he can’t cover—a sign of an accomplished writer.

“I sometimes try to figure out how I got into writing,” says Dr. Pisetsky. “Writing fiction is about describing feelings at a certain level. So it has made me a better observer and listener when dealing with patients.” 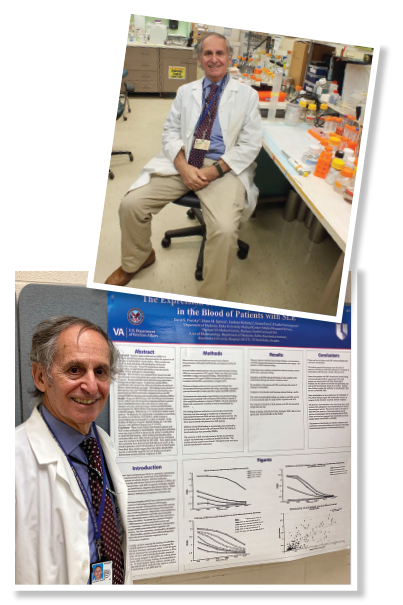 Top: Dr. Pisetsky in his lab at Duke University Medical Center. Bottom: Dr. Pisetsky next to an enlarged abstract of his team’s paper published in Clinical Immunology.

Many years ago, Dr. Pisetsky completed a writing course at Duke called Fiction Fundamentals to enhance his writing techniques and skills.

He was already familiar with science writing, but in this course, he says, “I wrote short stories and vignettes, which I had never done before. … It was a lot of fun.”

Among his favorite pieces is a short story he wrote called “Till Death Do Us Part.”1 The plot focuses on a young doctor experiencing a painful marital separation. At the same time, he’s treating a gravely ill woman whose husband would soon be confronted by her death.

“This was based on a real event,” he recalls. “I was aggressively treating a woman in her 80s for pneumonia. She was intubated and on a respirator. That was very distressing for her husband, who finally said, ‘Enough is enough.’”

“As a young doctor, I was very moved by the situation, but it took over 30 years before I tried to turn the event into the basis of a short story,” he says, adding that the story was published in the Journal of General Internal Medicine.

Later on, he tried his hand at writing a book that dealt with the interaction between physicians and drug companies. He distributed the manuscript to various publishers. It was repeatedly rejected until he got a phone call one Friday afternoon.

“The publisher liked the idea and was interested in publishing it,” says Dr. Pisetsky, who felt that his creativity and hard work had finally paid off. “But then the publisher called me back on Monday and decided against it, saying it had enough books on medicine.”

Handling rejection, and sometimes heart­break, is an integral part of a writer’s job. Ask any author or journalist. Still, fate had something else in store for Dr. Pisetsky.

One of his friends, Jonathan Kay, MD, also a rheumatologist, was flying to a medical conference. He happened to sit next to the publisher of Durham Magazine. Dr. Kay bragged about Dr. Pisetsky’s writing skills and showed the publisher one of his articles. The publisher liked it so much that he later hired Dr. Pisetsky as a freelancer to write nonmedical, fun pieces, like comparing Durham to New York City.

“It would be fun to go into the dentist’s office and see a copy of the Durham Magazine sitting on the table,” he says. “I could hardly resist showing my picture in the magazine to people in the office.”

The editorial direction of the magazine has since changed, and Dr. Pisetsky no longer writes for the publication, but he feels very fortunate to have had the chance to reach a different kind of audience and write about topics other than medicine.

Considering everything that Dr. Pisetsky has written over the years, he says one of his most important papers was published in the International Journal of Molecular Science recently.2

“We’ve made some discoveries about lupus and antibodies directed to DNA,” he says, adding that the recent research presents a new way of looking at lupus. “While most studies of DNA in lupus have mostly been based on B-DNA, which is the classic double-stranded helix, a different structure is called Z-DNA because it has a zigzag backbone. But it was never clear where Z-DNA came from. Our research found that the DNA from certain bacteria has a Z structure.”