You are here: Home / Articles / Rheum After 5: Polly Ferguson, MD, Is Perfecting Her Pottery Skills
Print-Friendly Version / Save PDF

Roughly three years ago, Polly Ferguson, MD, a physicianscientist and director of the rheumatology, allergy and immunology department at the University of Iowa Stead Family Children’s Hospital, Iowa City, Iowa, took the first step toward realizing a dream she has had for nearly 30 years: becoming a skilled potter.

In 2017, she signed up to take her first pottery class at a nonprofit ceramic and glass center just 30 minutes from her home. She’ll always remember the first time she sat down at a potter’s wheel. Unbeknownst to Dr. Ferguson, the last artist to use the machine had left it on and, after she placed a ball of clay on the wheel, it spun around very fast. Bits of clay flew off in every direction. It was a novice mistake—not checking that the wheel was off or the pedal was pressed all the way down. A mistake she would never repeat.

Since then, Dr. Ferguson has spent up to six hours each week at the center, creating more than 100 vases, pots, plates and other pottery pieces, while learning creative techniques from experienced potters. 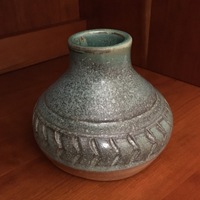 Dr. Ferguson has made more than 100 vases, pots, plates and other pieces of pottery.

Academic & Career Accomplishments
Dr. Ferguson earned her medical degree in 1990 from the Roy J. and Lucille A. Carver College of Medicine at the University of Iowa, Iowa City. Her post-graduate training at the University of Virginia, Charlottesville, included a pediatric internship from 1990–’91, a pediatric residency during the next two years, a pediatric immunology and rheumatology fellowship from 1993–’97 and a postdoctoral research fellowship from 1997–’99. Then she served as a research associate and pediatric fellow at the school from 1999–2000.

Two years later, she joined the faculty at the University of Iowa as an assistant professor in pediatrics and, in 2016, was promoted to a full professor.

Over the years, Dr. Ferguson has received many honors and recognitions, including the ACR’s 2019 Distinguished Service Award. For the past decade, she has also directed a research laboratory at the University of Iowa funded by the National Institutes of Health (NIH), which focuses on pediatric auto-inflammatory bone disease. She has also served on many ACR/ARP committees, including the PRSYM Abstract Review Committee and JIA Guideline Development Group. In 2018, she began serving a five-year term on the Board of Scientific Counselors at the NIH’s National Institute of Allergy and Infectious Diseases.