Last month, I wrote about braving the threatening wrath of the Icelandic volcano Grímsvötn in order to attend the 2011 European League Against Rheumatism (EULAR) Congress in London. Fortunately, I arrived safely at Heathrow airport and made my way to the ExCel convention center. I want to now share with you some of my impressions from this year’s congress.

Just as in wine, where an international style prevails—cabernet, tempranillo, and syrah are all made to taste alike whether from Australia or Spain—an international style in medical meetings seems now to prevail. The distinct style and charm of the exhibit hall in EULAR—once a boisterous place of magicians, mimes, and cartoon artists—is fading, and the ambience is converging on that of the United States. Down the hall from EULAR, a convention called the MCM Comic Con was much livelier, featuring anime, manga, games, sci-fi, and cosplay (whatever that is), as thousands of young people decorated and dressed outrageously as comic book heroes—Green Lantern, pirates, X-Men—filled the promenade. I asked one of these people, a young man with purple lipstick and neon hair, why he was there. Looking incredulously at me across a generational chasm, he said, “I’m here to have fun.” “Me, too,” I could have replied, but I demurred. 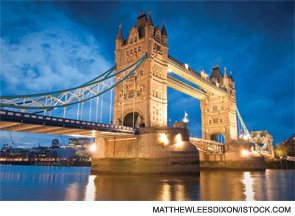 The Tower Bridge on the River Thames in London.

In the big exhibit halls, amidst acres of high-tech displays that glittered and popped with electronic wizardry, there was still espresso (as fine a treatment of jet lag as any) available at the drug company booths. At one of the espresso stations, however, a sign said that people from Vermont and Minnesota were unable to partake of the goodies because state laws prohibit physicians from accepting items even of nominal value lest they started writing prescriptions under the influence. Since it is obvious that I am American, I was expecting to be carded, but happily I did not have to produce my passport or driver’s license to get a little cup of java.

I am, of course, concerned that state legislators think that the monetary value of a cup of espresso (even with a biscotti) could twist the workings of my brain to set me in a frenzy of prescription writing for drugs that my patients do not need. If items worth a dollar or two really can bend a physician’s mind, I think that the Sustainable Growth Rate really needs fixing. All I can say is that I hope that people from the Mayo Clinic were on their best behavior, avoiding any embarrassing international incident if someone was caught with his caffeine up. Most certainly, when it is time to renew your medical license, you do not want to indicate that you were extradited from England for being apprehended for possession of illegal cappuccino.