You are here: Home / Articles / Rheum with a View
Print-Friendly Version / Save PDF

How many times do we write this or see this recorded or presented without really carefully examining the eye or the fundus? How many of us still look at the fundus? Most medical residents don’t even carry or own ophthalmoscopes and have little comfort with the exam of the eye or fundus. This leads me to the new recommendations regarding antimalarials. Recently, my college and medical school roommate, Marty Pearlman, MD, and his wife visited my wife and me. Marty went into ophthalmology and now does retinal surgery in Lansing, Michigan. Marty’s love for what he does is so infectious that two of his four children are also ophthalmologists; in fact, one of them specializes in the retina.

During our visit, Marty informed me that the American Academy of Ophthalmology (AAO) developed a new set of recommendations on screening for antimalarials.1 I was unaware of this—and perhaps others are, too. Briefly, these are revisions of 2002 recommendations. This update was prompted by improved screening tools and data, suggesting that risk of drug toxicity increases toward 1% after five to seven years of use or a cumulative dose of 1,000 grams of hydroxychloroquine.

Recommendations are that a routine dosage of 400 mg hydroxychloroquine daily is acceptable for all, but for individuals of short stature (rather than dosing by weight), baseline evaluation should be carried out, annual screening should begin after five years unless there are unusual risks, and at least one of the newer tests—multifocal electroretinogram (mfERG), spectral domain optical coherence tomography, or fundus autofluorescence—should be used routinely. Additionally, mfERG may replace the visual field exam, Amsler grid testing is no longer needed, and fundus exams should be documented. (Editor’s Note: For more on the new AAO guidelines, see “Hydroxychloroquine Retinopathy Still Alive and Well” in the May 2011 issue of The Rheumatologist, p. 50, or online at www.the-rheumatologist.org/details/article/1066217/.html.)

Marty has done very well, and I couldn’t be happier for his success. I recall when I moved out of our shared apartment (I was getting married) that Marty and I had to split our stuff, most of which had little value. I lost the final coin flip, so he got the good rug, and I was left with the stethoscopic heart sounds record. So, he still owes me; maybe he can show me how to do some of those retinal tests. 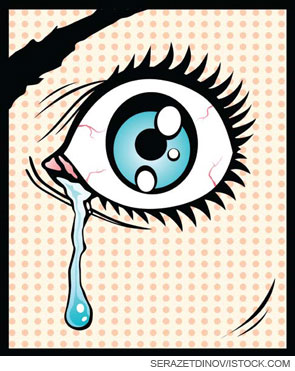 What is contained in a tear?

There Will Never Be a Panush’s Syndrome

Nor will there be a Panush’s disease, or even Panush’s sign. My mom (may she rest in peace) would have been disappointed. We all were notified electronically about the recommendations of the ACR, the American Society of Nephrology, and European League Against Rheumatism to begin shifting away from eponyms.2 This was prompted “by evidence that Dr. Friedrich Wegener was a member of the Nazi party before and during World War II,” according to the authors of the article, which was published in Arthritis & Rheumatism, Dr. Wegener may also have been complicit with war crimes.

Eric Matteson, MD, and I addressed these issues in a previous article, reviewing the available information regarding Wegener and suggesting that the time had come to stop using eponyms.3 Previously, Daniel Wallace, MD, and I, assisted by Rabbi Elliot Dorff, PhD, a leading ethicist, had persuaded international rheumatology editors to abandon “Reiter’s syndrome.” Reiter was president of the Reich Health Office and responsible for all experiments in concentration camps for reactive arthritis. When Ephraim Engleman, MD, who “named” Reiter’s syndrome in 1942, became aware of this, he agreed to retract his suggestion to use the term.4

I was disappointed that the board of directors of the ACR then declined to consider the issue of writer eponyms in 2007, when the Reiter retraction was published, but I am pleased that our organization and others are now confronting these challenging ethical issues. Kudos to them for their stand. They got this right.

This was one of my favorite songs growing up. Another was “Sherry” because I had an unrequited crush on a girl named Shari. I got a kick out of seeing Frankie Valli and the Four Seasons, who recorded these hits, live last year while I was still in New Jersey.

Crying—emotional tearing—is uniquely human.5 Investigators from the Weizman Institute in Rehovot, Israel, carried out an imaginative, intricate, and compelling series of experiments to show that human tears contain a chemosignal with profound effects. Men who sniffed odorless tears, obtained from women in circumstances with no emotional content, experienced reduced sexual appeal for the women, less sexual arousal, reduced physiologic measures of arousal, lowered testosterone, and concomitant changes in brain magnetic resonance images. Powerful stuff, these tears. “Not tonight, dear” would seem to be the simple message—an evolutionary signal. What else might be in tears? Where else might these or similar chemosignals be found? What are the active compound(s)? What are their mechanism of action? What else might they do? How might tears be involved in the changes we see in our patients with eye disease? Maybe there’s more to the eye than PERRLA. the rheumatologist