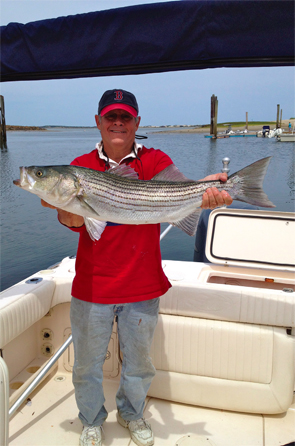 Since his children now have careers and families of their own, Amy accompanies Dr. Coblyn on each fishing trip. “I won’t go myself,” he says, adding that he fishes only during warm weather, from roughly mid-May to early October. “I’m too chicken, and Amy prefers to be able to see land from the boat at all times.”

Still, the couple have a few fishing tales to tell of their own. One time, while fishing in Cape Cod Bay on Columbus Day, black clouds suddenly filled the sky. He immediately turned the boat around and headed back to the pier, pummeled by sleet and hail. “That’s the last time we will ever go fishing so late in the year,” he says.

Last Mother’s Day, he read in the local paper that right whales were in Cape Cod Bay. As the rarest of all large whales, they are typically recognized by their enormous heads and jaws that accommodate hundreds of baleen bristles or teeth.

Dr. Coblyn and his wife headed out to Cape Cod Bay that Sunday, surprised to be the only boat in sight.

“We went out 10 miles, which I almost never do,” he says. “I’m usually a wimpy fisherman. I want to see land. I was about to turn around when my wife said, ‘Look over there.’ There were three right whales 100 yards from us … swimming around, frolicking. That was one of the most amazing experiences I’ve ever had on the boat.”

Dr. Coblyn believes fishing and rheumatology share a common evolution. In the old days, he says rheumatologists would spend much time trying old-fashioned remedies like liquid gold shots. It would take a long time to finally hit “a winner,” he says. Fishing is the same way. You can spend many hours—even days—fishing and not catch a single fish, big or small.

But many things have changed since then. Now rheumatology drugs act fast. Physical pain experienced by patients can be quickly relieved. Likewise, people who fish can cheat a little by using technology that finds fish. No more anguish. No more frustration. No more defeat.

Although he never claims to be an expert fisherman, he is willing to share a valuable secret he learned long ago. When coming back from a fishing trip empty-handed, just say the fish weren’t biting, because it was too cold, too hot, too windy or the tide was too high low or too high. “You’ll sound like you know what you’re doing,” he jokingly says.

However, there’s nothing funny about how fishing has enhanced his life.

“It’s being away and an escape to enjoy the beauty of the water, sky and peaceful surroundings with my wife,” he says. “To me, that’s the ultimate.”

Listen to Dr. Coblyn discuss more about fishing and rheumatology.