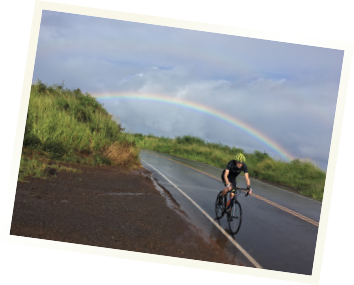 Dr. Simms loves competing in triathlons because it gives him the sense that nothing is impossible.

Every single morning—even on weekends—Robert W. Simms, MD, wakes up at 3:45 and is out the door by 4:30 to swim, run or cycle for at least one hour. After weekday workouts, he then heads to his job at Boston University (BU) School of Medicine, where he serves as professor of medicine and rheumatology section chief overseeing a research and clinical group.

Although Dr. Simms doesn’t have any sport trophies or medals adorning his office, he is the real deal when it comes to athleticism. He says his two grown sons believe he’s insane for maintaining this schedule for the past 20 years, but the USA Triathlon organization thinks otherwise. Every year over the past decade, it has ranked Dr. Simms as an all-American, recognizing him among the top 100 athletes in his age bracket based on his performance at his three best triathlons each calendar year.

“At last count, I had competed in over 120 triathlons,” says Dr. Simms. “I really like the training. The race is the motivation for doing the training and also the icing on the cake. It’s the journey to get there that really keeps me at this.”

Dr. Simms says that when he was a child his mother realized he needed a physical release to stay focused in school. “I needed to be tired from physical exercise in order to put my best effort into my schoolwork,” he explains.

Although he says he was a tech­nically competent swimmer in high school, Dr. Simms recalls that he barely qualified for the varsity swim team. He skipped more afternoon practices than he could count. He found downhill skiing much more fun. As he grew older, cross-country skiing took the place of downhill because it offered more in the way of aerobic activity. To stay in shape for the sport, he also started running and playing squash.

“While on the faculty at BU, I started competitive cross-country skiing (up to 30 miles),” he says. “But you couldn’t start [training] in the fall and expect to be competitive in the middle of the season if you weren’t spending serious time in the off season staying in shape.”

One day in 1998, a friend suggested triathlons as way to stay fit. On a whim, Dr. Simms, who was in his early 40s at the time, showed up at a local race with a rusty, 10-speed bike, borrowed wetsuit and worn-out running shoes.