Dr. Cutolo and colleagues evaluated the effect of the vasodilator iloprost compared to iloprost taken with bosentan (an endothelin receptor antagonist). They found that the group taking both iloprost and bosentan had increases in capillary number as assessed by nailfold capillaroscopy at two to three years follow-up.13 Later studies have shown that the drug combination exerts a remodeling effect on the microvasculature, decreasing the likelihood of digital ulceration and helping to stabilize lung function.14

Capillaroscopy may also be of benefit in evaluating certain patients with interstitial lung disease. Such lung disease is commonly found in SSc and related diseases, but it can also be found in other situations, such as from environmental factors or infection. Patients with interstitial lung disease and capillaroscopic findings indicative of systemic sclerosis are likely to soon develop the full feature of systemic sclerosis or a closely associated disease.2

Similarly, capillaroscopy can provide an initial screening technique for interstitial lung disease in patients with mixed connective tissue disease or scleromyositis. The technique can also sometimes be beneficial in helping to distinguish dermatomyositis from polymyositis. In the former, severe capillary abnormalities are common, similar to the scleroderma pattern; in polymyositis, any abnormalities tend to be mild.2

Researchers have extensively examined nailfold capillary characteristics in many other rheumatic diseases, but for the most part have not found repeatable patterns of significance. Patients with lupus, antiphospholipid syndrome, Sjögren’s syndrome or other connective tissue diseases may also show nonspecific abnormalities. It should be noted that nonspecific abnormalities on capillaroscopy can also be found as sequelae from other medical conditions, such as advanced diabetes or hypertension.2 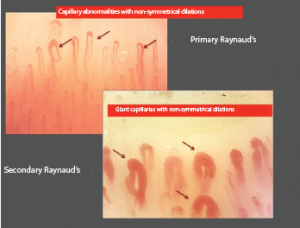 Early structural changes in a patient with Raynaud’s phenomenon (left picture) that should identify very early alterations of the microvessels (dilations under 50 micrometers). The subsequent early morphological changes that identify the secondary associated systemic sclerosis are the presence of symmetrical dilations over 50 micrometers, called giant capillaries (right picture).

Capillaroscopy has been relatively slow to be accepted and widely used as a tool, but that is changing. Dr. Cutolo explains that the slow adoption was mainly due to the absence of clear validation and scoring and classification of capillaroscopic patterns. It has become more adopted as researchers have addressed these concerns and as the technique has demonstrated its value in early differential diagnosis and prediction for clinical complications in SSc.