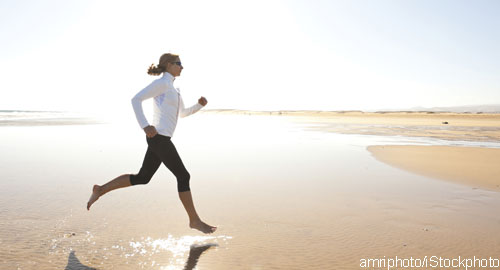 Encouraging physical activity via pedometer usage and goal setting may be a simple, low-cost approach to reducing fatigue in patients with rheumatoid arthritis (RA), say the co-investigators of a new study funded by the Rheumatology Research Foundation and recently accepted for publication in in Arthritis Care & Research.1

“[RA patients] suffer from fatigue, which is under-recognized and undertreated,” says Mary Margaretten, MD, associate professor of medicine at the University of California, San Francisco (UCSF) School of Medicine. “Prescribing pedometers to patients is a simple, inexpensive, effective intervention to treat fatigue in patients with RA.”

The study, “Physical Activity to Reduce Fatigue in Rheumatoid Arthritis: A Randomized, Controlled Trial,” followed 96 patients with RA in three randomized groups: a control group that included basic education on physical activity (EDUC); a group that was provided pedometers and step-tracking diaries (PED); and a group that was provided a pedometer, diary and step targets (PED+).1 Researchers monitored participant activity at the beginning and end of the study, as well as followed up with phone calls at the 10-week mark. All but eight participants completed the assessments.

The Results
According to the study, both intervention groups increased their number of steps (PED: +1,441, PED+: +1,656), and the members of the control group decreased their number of steps (-747). Self-reported fatigue decreased significantly in the PED and PED+ groups, although changes in fatigue were not significantly different between the groups. Function, self-reported disease activity and depressive symptoms did improve in the PED and PED+ groups.

“We know that even with optimal drug treatment, RA patients still have considerable levels of fatigue. There needs to be a way for them to manage fatigue outside of the normal treatment regimen,” says lead author Patti Katz, PhD, professor of medicine at UCSF School of Medicine. “We found that increasing physical activity did indeed make a difference in peoples’ fatigue level. It’s important because this is something patients can do themselves. They don’t have to go to a gym. They don’t have to spend a lot of money. They don’t have to spend a lot of time—they can go walk around the block. It makes a difference, and it doesn’t make them hurt more.”

Of course, getting patients with RA to exercise more is no easy task. Even with the low cost and advancements in technology—nearly every smartphone has a built-in pedometer—some patients may need their rheumatologist to explain the benefits and offer encouragement.