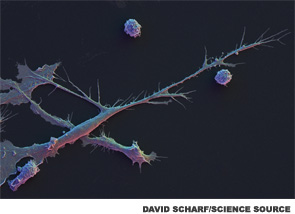 Color-enhanced Scanning Electron Micrograph (SEM) of human dendritic cells and T lymphocytes or T cells, both of which play a central role in cell-mediated immunity.

The current T cell maturation paradigm assumes that, in a healthy body, self-reactive T cells are deleted or inactivated in the thymus. This would be especially true for T cells that react to antigens expressed throughout the body. This model of thymic education would predict that autoreactive T cells would be difficult to find, and, indeed, this is the case. Many autoimmune diseases, however, are mediated by T cells and, presumably mediated by self-reactive T cells. These autoreactive T cells must somehow be able to escape thymic selection and circulate through the body in order to mediate autoimmune diseases such as rheumatoid arthritis (RA).

A new investigational strategy provides a means to identify and characterize autoreactive T cells that escape thymic selection and cause autoimmunity. The novel approach to T cell analysis was published by Yoshinaga Ito, PhD, assistant professor of experimental pathology at Kyoto University in Japan, and colleagues in the Oct. 17 issue of Science.1

The group has previously demonstrated that attenuated signaling through the T cell receptor (TCR) alters thymic T cell selection and regulatory T cell function. They performed their research using BALB/c SKG mice that have a hypomorphic point mutation of zeta-chain associated protein 70 (ZAP-70), a TCR-proximal signaling molecule. The resultant altered signaling through the TCR compromises the thymic selection of the T cells in the mice, leading to positive selection of autoimmune T cells that would otherwise be negatively selected. SKG mice thus go on to develop T cell-mediated spontaneous autoimmune arthritis and can serve as a mouse model for RA. Through their study of the SKG mice, the investigators concluded that the mice represent a model for the ability of a genetic mutation in TCR signaling to contribute to the development of an autoimmune disease. Moreover, the group hypothesized that they had identified an underlying mechanism of autoimmune disease whereby graded attenuation of TCR signaling can alter the T cell repertoire in a progressive manner, thus predisposing an individual to autoimmune disease.

Focus on the T Cell Receptor

In the current study, the team continued to make use of the SKG mice with the altered TCR signaling. They began their study with the assumption that the ZAP-70 mutation changed the T cell sensitivity to thymic negative selection, thereby allowing autoreactive T cells to be produced by the thymus, persist in the body, and create symptoms of arthritis. The investigators thus set about isolating the arthritogenic TCRs and characterizing the self antigens that they recognized. Their experiments revealed that the arthritogenic CD4+ T helper cells in these mice made use of specific dominant TCRs.