You are here: Home / Articles / The Brain in Lupus
Print-Friendly Version / Save PDF

Cognitive dysfunction: A decline in thinking skills such as concentration, reasoning, memory, language, or perceptual skills resulting from direct or indirect effects on brain structures and systems. The rate of completion of tests is less important.

Focus on Cognition in Lupus

To apply these advances to the study of lupus, we organized a conference on cognitive dysfunction, held in New York City this April and sponsored by the Mary Kirkland Center for Lupus Research at the Hospital for Special Surgery in New York City. The attendees of the conference were a diverse and eclectic group, and certainly polyglot in their scientific language. Cell biologists, neurobiologists (including Dr. Greengard), neuropsychologists, neurologists, imaging experts, clinicians, and “mouse doctors” who work with animal models of neurologic disease, all gathered in a New York hotel for state-of-the-art presentations on rapidly evolving science. This conference produced a lively dialogue among the participants and demonstrated how much we know and how much we don’t know about the effects of lupus on the brain.

In their lectures at the conference, neurobiologists described how the processes of creation, maintenance, and recall of normal memory have identifiable synaptic links and precise anatomic addresses within the brain. Furthermore, they showed how these processes can be experimentally manipulated at the molecular and cell level in in vitro and in vivo animal models. Importantly, these studies showed, in both animals and humans, that memories can be imaged, interrupted, or elicited. Since memory dysfunction is one of the commonest manifestations of cognitive dysfunction in lupus, understanding the neurobiology of normal and abnormal memory is an important goal. 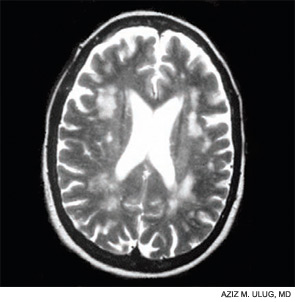 Neuropsychologists distinguish between brain efficiency and brain function. (See Table 1, below left.) Abnormalities of efficiency are reflected primarily in white matter, while those of function are primarily reflected in gray.

A patient’s failure to perform a neuropsychological testing task results from either an inability to comprehend the task (reduced brain function)—as in patients with posterior brain injury—or from an inability to organize sequential tasks rapidly enough for successful completion (reduced brain efficiency). Testing for domains of cognition can identify patterns that imply both the anatomy and the pathophysiology of injury. The cognitive battery studies suggested by the ACR Task Force on cognitive testing (see Table 2, right) distinguishes among the neuropsychological domains, but most papers written by rheumatologists on cognitive dysfunction in lupus do not analyze patients in such detail.