You are here: Home / Articles / The Science of MDHAQ/RAPID3 Scores
Print-Friendly Version / Save PDF

An “evidence-based visit” in usual rheumatology care–beyond clinical trials and other research–appeared possible based on the Health Assessment Questionnaire (HAQ) and Arthritis Impact Measurement Scale (AIMS), which appeared in Arthritis & Rheumatism in 1980, the same year in which I moved to Vanderbilt University.1,2 I had been a junior faculty member at Stanford in 1975, as director of the Clinical Immunology Laboratory and a basic virology researcher–hardly a health services researcher. However, interactions with Jim Fries, MD, and Hal Holman, MD, fellow faculty members at Stanford and developers of the HAQ, had prepared me to recognize that quantitative, “scientific” data could emerge from usual clinical care, as well as from the laboratory.

Clinical measurement had long been a major interest, initially as a student in 1961 when I performed erythrocyte sedimentation rates (ESRs) in the Columbia University laboratory of Charles Christian, MD. This interest was expressed in 1969 in development of a radioimmunoassay for DNA antibodies, so that a diagnosis of systemic lupus erythematosus (SLE) could be based on a routine clinical test rather than a “research test.”3 Clinical decisions in rheumatoid arthritis (RA) in 1980 (and today) were based primarily on information from the patient, rather than laboratory tests, although laboratory tests were (and often remain) the only quantitative clinical information in the medical record. Self-report questionnaires could document patient history information concerning physical function and pain as quantitative scores, rather than as gestalt, nonquantitative descriptions (e.g., “ ‘doing well’ while the patient has become progressively crippled before their eyes”).4 Standard, quantitative, patient self-report data could meet criteria for “scientific” measures, similar to laboratory tests. 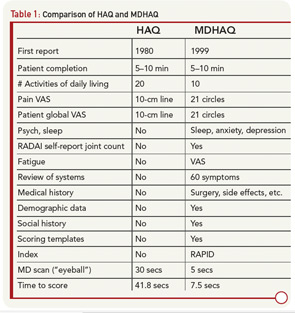 click for large version
Table 1: Comparison of HAQ and MDHAQ

To incorporate quantitative clinical measurement in clinical care, I asked the Vanderbilt clinic receptionists to distribute a HAQ to patients before they saw me. This practice was implemented and maintained easily over 27 years, although the receptionists were employees of the nursing service (rather than the physicians) and turned over frequently. Review of the information provided by the patients on questionnaires was very helpful prior to performing my own history and physical examination. Leigh Callahan, PhD, Christopher Swearingen, PhD, and Raye Brooks, colleagues at Vanderbilt, helped to establish a database to provide flowsheets of quantitative self-report clinical scores, along with traditional laboratory tests and medications for all visits of all patients (with any diagnosis). 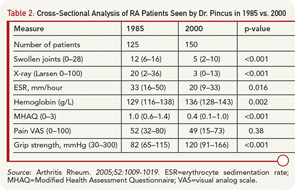 click for large version
Table 2: Cross-Sectional Analysis of RA Patients Seen by Dr. Pincus in 1985 vs. 2000

Routine completion of a HAQ in my clinic led to several changes to provide additional clinically useful information within a two-sided one-page format. The original 20 HAQ activities in eight categories were compressed to eight activities, one from each category; activities performed by all people each day were included (e.g., “shampoo your hair” was deleted). Queries concerning “aids, devices, or help from another person” were dropped, since they were usually negative and complicated scoring. A modified HAQ (MHAQ) reported in 1983 described similar results to the HAQ, though with scores lower by about 0.3 units because simplest activities were included.5 These were initial efforts in a continuous quality improvement (CQI) process that has lasted more than 25 years involving further modifications of the original two-sided, one-sheet HAQ (see Table 1), ultimately leading to a multidimensional HAQ (MDHAQ) (see Figures 1 and 2).6-8