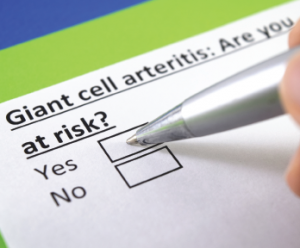 AMSTERDAM—Just how seldom prednisone is successful at inducing remission in giant cell arteritis (GCA), despite such a long history of use for the disease, is one of the many lessons to emerge from the data in the GiACTA trial, said the principal investigator of the trial, which is the largest ever in GCA and is still ongoing in its assessment of how to best use the IL6-inhibitor tocilizumab for these patients.

The trial’s findings also offer lessons on the steroid load that GCA patients on prednisone are prescribed, on quality-of-life improvements to which GCA patients can reasonably aspire when taking tocilizumab and the best way forward in the treatment of these patients, John Stone, MD, MPH, professor of medicine at Harvard Medical School, Boston, and the principal investigator of the trial, said in a session at EULAR: the Annual European Congress of Rheumatology.

In the trial, 58 of the 101 patients who received prednisone without tocilizumab—half of them on a tapering dose over 26 weeks, and the other half tapered over a year—had disease flares within one year.1

“This is really bad,” Dr. Stone said. “[Prednisone] has been the cornerstone therapy of our disease for seven decades, and 60% of patients flared within one year—many while they were still taking treatment.” Many of these patients were taking between 5 mg and 20 mg of prednisone a day. He added that clinicians didn’t have this information until the GiACTA trial was done.

The routine failures of prednisone and the disease flares seen in just 24% of tocilizumab-treated patients over a year—with positive effects seen far earlier than a year—are reason to start treating GCA patients on tocilizumab and steroids right away, Dr. Stone said.

“If you put the patient on a full year of steroids, the patient will only have a third of a chance of being off prednisone completely at one year,” Dr. Stone said, noting that there’s greater than an 80% chance of failure over one year. “I think it’s better to start right off with tocilizumab and steroids.”

Patients in the prednisone groups of GiACTA ended up getting the same cumulative dose of the drug, whether they were on a 26-week taper or a 52-week taper, because those in the 26-week arm flared earlier, requiring a boost in prednisone use.