You are here: Home / Articles / What to Do with Erosive, Inflammatory Osteoarthritis
Print-Friendly Version / Save PDF 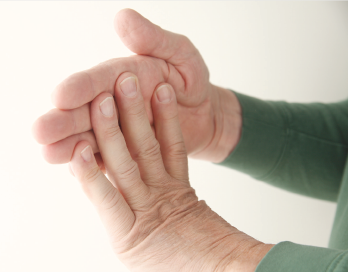 CHICAGO—Is erosive, inflammatory osteoarthritis (EOA) a separate condition from osteoarthritis (OA)? Roberta Ramonda, MD, PhD, a rheumatologist at the University of Padova, Italy, spoke at the 2018 ACR/ARHP Annual Meeting on the clinical presentation of EOA and how it differs from OA.

EOA is characterized by a frequent aggressive clinical course and occurs most often in the hands of middle-aged women, when it is called erosive hand osteoarthritis. The mean age of onset is 50 years, while typically the earliest onset occurs at 36 years. Although EOA has been considered an uncommon clinical subset of generalized OA, Dr. Ramonda explained that debate continues over whether it is a separate condition with a pathophysiology distinct from OA.

Those rheumatologists who consider erosive hand OA to be a severe form of hand OA feel the difference in frequency and patterning of joint involvement between these two forms is not significant. Evidence is accumulating, however, to suggest the pathophysiology of erosive hand OA is distinct from hand OA, Dr. Ramonda noted. This evidence includes clinical and radiological distinctions that translate into aggressive clinical involvement in erosive hand OA, with higher clinical burden—more pain, disability, stiffness—and worse outcome than in non-erosive hand OA. Moreover, patients with erosive hand OA are more likely to be positive for HLA-DRB1*07.

Patients with erosive hand OA ex­perience these inflammatory episodes frequently, and they often involve several joints simultaneously. They may also experience paresthesia of the fingertips and morning stiffness lasting less than 30 minutes. Eventually, patients with erosive hand OA will develop deformities of the distal interphalangeal (DIP) and proximal interphalangeal (PIP) joints, medial and lateral subluxations, as well as instability, flexion deformity and ankylosis. The instability and ankylosis of the interphalangeal joints result in a rapid progressive loss of function.

The X-rays of patients with erosive hand OA reveal erosions, ankylosis and joint space narrowing, Dr. Ramonda stated. Patients may also have osteophytosis, subluxation and periostitis. These may present as “gull-wing and sawtooth deformities,” with a subchondral pseudocyst or crumble erosion. This central bony erosion distinguishes erosive hand OA from hand OA, which does not have erosion, but rather bony enlargement in Heberden’s and Bouchard’s nodes. In addition, erosive hand OA affects primarily bilateral DIP and PIP joints, but hand OA tends most often to affect the carpometacarpal joint of the thumb. Erosive hand OA is thus defined radiographically by subchondral erosion, cortical destruction and subsequent reparative change, which may include bony ankylosis.

Although experts have, to a large extent, characterized erosive hand OA, its diagnosis remains challenging due to lack of a uniform definition, and definitive classification and diagnostic criteria. Moreover, even though erosive hand OA is an area of active research, the pathophysiology remains murky, and clinical trials for patients with erosive hand OA remain few and far between. This continuous redefinition of the disease hampers patient recruitment for potential clinical trials.