You are here: Home / Articles / A Unique Structure for Tackling Psoriatic Disease
Print-Friendly Version / Save PDF

Pictured (left to right) are Drs. Gladman, Helliwell, and Mease during the August 2010 filming of the musculoskeletal portion of the GRAPPA Video Training Project.

On August 14, 2003, thought leaders in rheumatology and dermatology were set to arrive at the New York Marriott Marquis to start work on a collaborative infrastructure to advance the understanding, diagnosis, and treatment of cutaneous psoriasis (PsC) and psoriatic arthritis (PsA). The meeting was the culmination of nearly two years of work on the part of rheumatology and dermatology leaders, including Oliver FitzGerald, Dafna Gladman, Philip Helliwell, Arthur Kavanaugh, Gerald Krueger, Philip Mease, Chris Ritchlin, and others.

And then, just as attendees were travelling to New York, the second-most widespread electrical blackout in history occurred. Some participants’ flights were cancelled due to the blackout. Those whose flights had lifted off before the outage arrived to find chaos. They combed through piles of luggage and endured long waits for cabs. When they arrived at the Marriott, many had to climb 30 flights of stairs using flashlights.

Undaunted, the meeting organizers searched out a hotel with power and relocated at the Warwick Hotel. By the time he arrived at the Marriott and saw the relocation sign, noted psoriasis researcher Gerald G. Krueger, MD, had walked a mile and a half in 92-degree heat with his luggage in tow. Nevertheless, the next morning, attendees rolled up their sleeves for a full day of presentations on the state of the art in PsA and PsC science. One founder was asked to create an acronym. Recalls Philip Helliwell, MD, PhD, senior lecturer in rheumatology in the Section of Musculoskeletal Disease at the University of Leeds in the United Kingdom, “I wrote the acronym on the back of an envelope!” At the end of the meeting, the group had a name and an acronym: the Group for Research and Assessment of Psoriasis and Psoriatic Arthritis (GRAPPA).

Dafna D. Gladman, MD, professor of medicine at the University of Toronto and senior scientist at Toronto Western Research Institute, in Ontario, Canada, a major driver of the GRAPPA effort and the organization’s first president, says, “It was a great meeting. Because of this power outage, there was more of a camaraderie that might not have developed otherwise.”

The group’s charge was ambitious: to provide an international forum for communication between dermatologists and rheumatologists, industry, and patient service leagues to expedite their research and educational agenda. Founders wasted no time once GRAPPA formed, launching several initiatives to meet their goals. Taking a cue from another group consortium organized around ankylosing spondylitis (called the Assessment of SpondyloArthritis international Society or ASAS; see “A Common Language for Spondyloarthritis” for more on this group), GRAPPA quickly began participation in the Outcome Measures in Rheumatology (OMERACT) process in 2004 to prioritize their domains of inquiry within PsA and PsC research.1 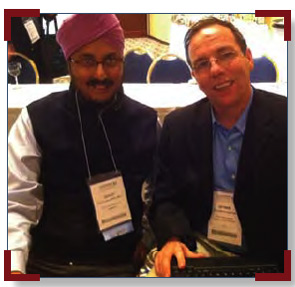 Although they had collaborated on several projects by email, GRAPPA members Gurjit Kaeley (left) and Dennis McGonagle had not met until the GRAPPA adjacent to ACR/ARHP Annual Scientific Meeting in Atlanta in November 2010.

Eight years later, the group continues to grow and holds annual meetings, both standalone and in concert with other rheumatology and dermatology meetings. The recent 2010 meeting in Miami, says Dr. Helliwell, “was probably one of the most vital and electric that I’ve attended.”

Because psoriatic disease affects multiple systems, says Joel M. Gelfand, MD, MSCE, medical director of the Clinical Studies Unit, assistant professor of dermatology and epidemiology, and senior scholar at the Center for Clinical Epidemiology and Biostatistics at the University of Pennsylvania Health System in Philadelphia, “The best way to solve problems is to bring people together who have expertise in different areas.” What makes the organization unique, he adds, is that it has accomplished a synthesis of evidence-based guidelines for treating psoriatic disease from both the skin and joint perspective and has created an infrastructure for testing a variety of diagnostic tools.