A 36-year-old woman presented at the Johns Hopkins Arthritis Center for a second opinion regarding a diagnosis of psoriatic arthritis (PsA). One year prior to our evaluation, she had developed pain and stiffness in her hands, feet, knees, ankles, elbows and shoulders. She had mild plaque psoriasis of the scalp and base of the neck, as well as inverse psoriasis of the perianal and genital areas. She had psoriatic nail onycholysis, hyperkeratosis and pitting.

Her past medical history was unremarkable. Her father had PsA that was effectively treated with adalimumab. The patient had been treated with adalimumab 40 mg subcutaneous every 14 days, but had recurrent peripheral arthritis after five months of therapy. She was switched to etanercept 50 mg subcutaneous weekly and standing non-steroidal anti-inflammatory drugs (NSAIDs), and she experienced some improvement. She was referred to our clinic for further evaluation.

In our clinic, her physical exam revealed several tender and swollen metacarpal, metatarsal and proximal interphalangeal joints, as well as dactylitis of her left fourth toe (see Figure 1, below). There was fingernail pitting. There was a 1 cm erythematous plaque on her scalp with minimal scale, and there were multiple erythematous raised papules with dry surrounding skin in the perianal area. Enthesitis was not present. 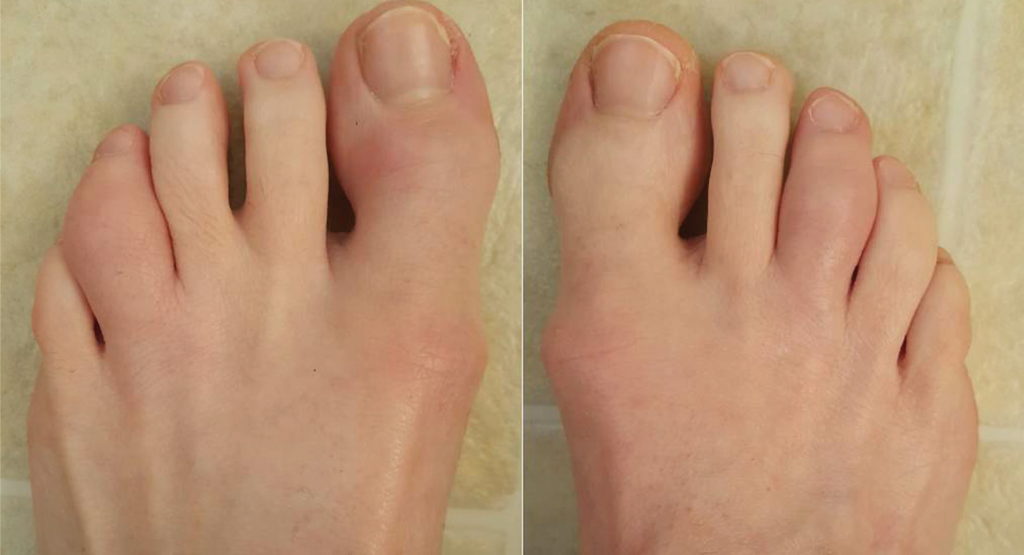 Laboratory studies were unremarkable, with a negative human leukocyte antigen B27 (HLA-B27) test and normal inflammatory markers. Magnetic resonance imaging (MRI) of the sacroiliac joints did not show sacroiliitis.

We diagnosed her with PsA on the basis of inflammatory joint pain, a current history of psoriasis, nail dystrophy typical of psoriasis, negative rheumatoid factor and dactylitis. She had a total score of 5 per the Classification Criteria for Psoriatic Arthritis (CASPAR); a classification of psoriatic arthritis is made for a score of 3 or greater.

Given the patient’s ongoing disease activity, we added sulfasalazine 1,000 mg twice daily to her regimen and continued etanercept. We avoided methotrexate and leflunomide due to the patient’s desire for future pregnancy. Her peripheral arthritis improved, and the dactylitis resolved (see Figure 2, below).