Bill St.Clair, MD, MACR, says one of the most exciting and proudest moments in his life wasn’t earning his medial degree or seeing his first published article on arthritis and rheumatology. Not even close. It was the 1991 National Collegiate Athletic Association (NCAA) basketball semifinal. Specifically, the basketball game between Duke University and the University of Nevada Las Vegas (UNLV).

Dr. St.Clair, a professor of medicine and immunology at Duke University Medical Center in Durham, N.C., still speaks about the last few seconds of that game as if he were watching it for the first time. UNLV came into the game with a 45-game winning streak and had walloped Duke at the NCAA tournament the previous year. Although UNLV was a huge favorite, Duke won, making it one of the most sensational games in NCAA history.

If you haven’t guessed it by now, Dr. St.Clair is a Dukie—a loyal, passionate and arguably addicted fan of the Duke Blue Devils men’s basketball team. He buys season tickets, has attended hundreds of games (even some out of state) and throws parties to watch championship games on TV or celebrate Duke’s victories. Maybe it’s Duke’s culture that converted him or the game’s fast pace, strategy and the extraordinary skill of the athletes. Either way, the team has no bigger supporter than

Dr. St.Clair, who says Duke basketball has added a dimension to the quality of his life. 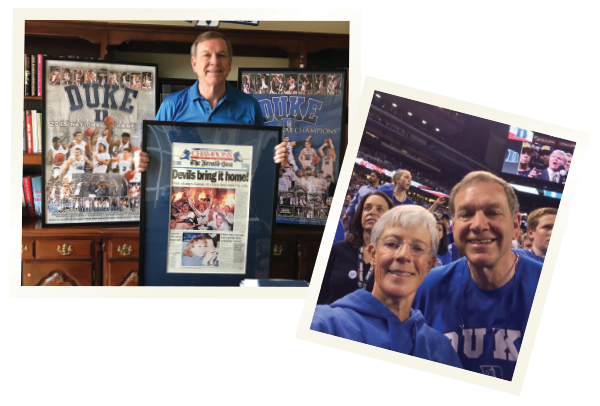 Dr. St.Clair in his home office, showing off his Duke memorabilia.
Dr. Bill St.Clair and his wife, Barb, at the 2015 NCAA basketball championship game in Indianapolis.

He was introduced to rheumatology during his third year in medical school. “I was rotating through pediatrics and came into contact with a patient, a young boy who had a blood clot in his leg,” he recalls. “It turned out he had lupus. I took the opportunity to write that up as a case report. That got me interested in rheumatology in general.”

During his internship, he spent four weeks in rheumatology and later completed his fellowship in the specialty. After all these years, he says he still enjoys the challenge of treating autoimmune disorders.