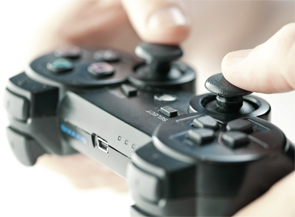 In the late 1990s, Thomas Baranowski, PhD, professor of pediatrics specializing in nutrition at the Baylor College of Medicine, Houston, applied for a grant. For years, he had been interested in finding ways to get children to change their diet and physical activity. He decided to try a video game, and he got the money to develop it.

“We showed that kids who played that video game increased their consumption of fruits and vegetables by a serving a day—which may not sound like a lot, but that’s as good as anybody did at that time and just about as good as anybody has done since,” says Dr. Baranowski.

He is now editor of Games for Health, the first peer-reviewed academic journal for research on video games used for medicine and health, launched in 2012.

Today, he says there’s “every reason to believe that video games can in fact impact behaviors” through their effects on the psychosocial factors that lead to those behaviors. There’s also evidence that they even influence health outcomes.

It seems that more and more people in academia and the healthcare world are—ever so gradually—coming to the same realization. The Wii Fit system has been increasingly used for health purposes. Popular smartphone apps, such as Zombies, Run! have put health games in the spotlight.

Nintendo has plans to release next year its first quality-of-life device that will keep track of fatigue by monitoring sleep. Although the device is not a game, the move by the gaming giant does point to a growing overlap between health and gaming.

A growing number of scientists and specialists are forming companies to develop health games, said Debra Lieberman, PhD, director of the Center for Digital Games Research at the University of California, Santa Barbara. Researchers at the center study how people process and respond to digital media and games—cognitively, emotionally, socially and behaviorally—and they use these findings to develop new game-design strategies and technologies that are engaging and effective in such areas as entertainment, learning, public policy and health.

“Health games and other digital media designed to support patient self-care and clinicians’ delivery of care are important components of the burgeoning digital health field,” she says.

She hopes that more people will play well-designed health video games that motivate and support healthy habits and, when problems arise, lead to good adherence and health decision making. “The immersive and interactive world of a video game can be an especially effective environment for improving health behaviors and health outcomes in ways that cannot be achieved with such

‘If [games are] going to be accepted as a legitimate health-related intervention then we need to increase the sophistication of the research.’ —Dr. Baranowski

media as print and video, although these media can be designed to influence health behaviors in other important ways,” she says.