You are here: Home / Articles / ACR Recommends You Treat the Symptoms for Gout Patients
Print-Friendly Version / Save PDF

In 1982, my wife (also a rheuma­tologist) and I attended our first American Rheumatism Association (now the ACR) national meeting. After the meeting we stayed with a friend in a suburb of Boston, where we also had the opportunity to meet our hostess’ in-laws, a retired general practitioner and his wife. When her father-in-law shook hands with me, I noticed that he had large, irregular, rock-hard excrescences over his PIPs and DIPs, one of which was draining whitish toothpaste‑like material.

This retired practitioner told me that he had arthritis that often acted up for which he took a well-known brand-name drug (he did not believe in taking generics) for symptomatic relief. When I realized that the drug he was taking was a potent corticosteroid (triamcinolone), I then noticed his rounded face, florid complexion and buffalo hump and understood why he had such trouble getting out of a chair. I told him I thought he had tophaceous gout and that we had better therapies for that than triamcinolone, but he was the seasoned practitioner and did not think that, as a fellow, I could tell him anything he did not already know.

In those pre-Sunshine Act and pre-CLIA days, one of the pharmaceutical companies had given rheumatology fellows polarizing lenses that could be used in a standard microscope to visualize crystals in joint fluid. This rather grouchy (understandable after I squeezed his hand), retired physician told me that the office in the rear of his home was equipped with a microscope, so I offered to show him the crystals.

Off I went with my pharma swag and some of the draining material on a slide to demonstrate negatively birefringent crystals, only to find that the microscope light source was a mirror that reflected light through the objective, an arrangement totally incompatible with the polarizing lenses (two pieces of dark polarized plastic cut from somebody’s broken sunglasses).

Our retired physician was highly amused by my complete failure and took this as further evidence of my youthful inexperience and general ignorance. And now, over 30 years later, I have come to find out that perhaps he was correct in his approach to treating gout. 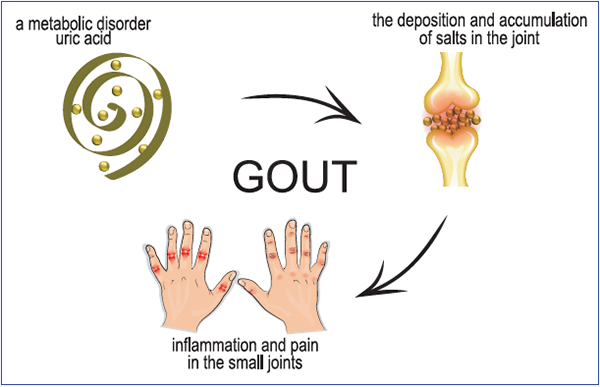 Although rheumatologists have followed a treat-to-target approach in the use of urate-lowering therapy for the treatment and prevention of recurrent gout attacks and tophaceous gout, the American College of Physicians’ (ACP) guidelines now indicate an alternative strategy. The ACP recommends a “treat to avoid symptoms” approach in which urate levels are not monitored.