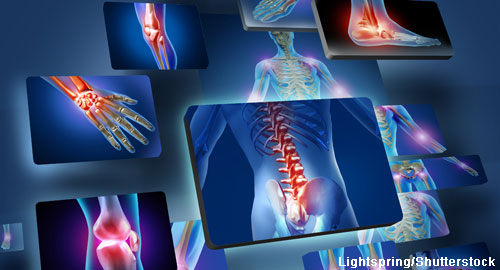 Joint health appears to depend on chondrocyte homeostasis, but a full understanding of the process has been slow to come into focus. A growing body of research has now documented various aspects of chondrocyte function that appear to be important for joint function. Example: Healthy chondrocytes release ATP, which is then converted extracellularly to adenosine, which can bind to the A2A adenosine receptor (A2AR). In contrast, chondrocytes from patients with osteoarthritis (OA) release decreased levels of ATP and have decreased levels of adenosine in their joints.

Research in equine cartilage explants suggests that the decreased levels of adenosine may feed the inflammation that characterizes OA. Specifically, when investigators removed extracellular adenosine from equine cartilage via treatment with adenosine deaminase, they documented a significant increase in the release of several markers of inflammation: nitric oxide (NO), matrix metalloproteinase (MMP)-13, MMP-3 and glycosaminoglycan (GAG). The multiple enzymes that play a role in the metabolism of ATP to adenosine appear to function as endogenous suppressors of inflammation. This growing understanding of the role of ATP/adenosine in inflammation has led researchers to question whether ligation of the A2AR on chondrocytes may be critical for joint homeostasis.

New research from the New York University School of Medicine in New York reinforces the belief that the maintenance of extracellular adenosine levels is an important homeostatic mechanism for cartilage health. Carmen Corciulo, PhD, and colleagues reported online May 11 in Nature Communications that, more importantly, as extracellular levels of adenosine fall, individuals become at risk for OA.1

The team performed the majority of its research in mice, specifically ADAR knockout (KO) mice and NT5E KO mice. Researchers have long noted that ADAR KO mice have mobility difficulties, as well as diminished use of their limbs during eating and mating. Additionally, chondrocytes that lack A2AR develop an OA phenotype with increased expression of Mmp13 and Col10a1. NT5E KO mice lack ecto-5’nucleotidase, an enzyme that converts extracellular AMP to adenosine. These mice develop spontaneous OA. The investigators’ work in these mouse strains provided some of their key observations on chondrocyte homeostasis and the effect of A2AR on bone.