Erdheim-Chester disease (ECD) is a rare, non-Langerhan’s cell histiocytosis characterized by tissue infiltration of CD68-positive and CD1a-negative foamy histiocytes.1 ECD was discovered as a lipid granulomatosis in 1930 by Jakob Erdheim and his pupil, William Chester, and approximately 500 cases have been described to date.1

ECD has a heterogeneous course and prognosis ranging from an asymptomatic process to a multi-systemic disease that can be life threatening. The most common ECD manifestations include symmetric osteosclerosis of long bones, followed by retroperitoneal infiltration.1 ECD can involve several organ systems, including cardiovascular, pulmonary, neurologic, ophthalmologic, skin and musculoskeletal systems.1 ECD has a male predominance and is typically diagnosed in adults between ages 40 and 70.2 Diagnosis is often delayed due to its rarity, multiple disease presentations and lack of awareness.

The etiology and pathogenesis of ECD remain only partially understood. Studies have shown elevation in chemokines and cytokines, including interleukin (IL-) 1, IL-6 and interferon alpha (IFN‑α), which point toward a Th-1 mediated immune response.3 Recent advances have linked aberrant BRAFV600E to patients with ECD and demonstrated an activation of downstream kinases.4

In recent years, IFN‑α has become a first-line therapy for ECD; however, limited efficacy and a poor side effect profile have highlighted a need for pursuing better therapies.2 IL-1 inhibition with anakinra is now also considered to be first-line treatment based on case reports and small case series.2 Early observations have shown that anti BRAFV600 may be a potential treatment, but further study is needed.

IL-6 levels were markedly elevated in patients with ECD who underwent analysis of their cytokine profile.5 It was further noted that patients treated with IFN-α normalized their serum levels of IL-6.5 Tocilizumab is a humanized monoclonal antibody that inhibits the IL-6 receptor. Therefore, anti-IL-6 therapy with tocilizumab (TCZ) was used to treat two cases of multisystem ECD.

In our cases, we show dramatic improvement with anti-interleukin-6 therapy and think it warrants more study. Current therapy is suboptimal, & there is a role for alternative treatments in ECD.

Two patients referred to the rheumatology service met criteria for diagnosis of Erdheim-Chester based on a combination of clinical and radiographic features. Findings from standard clinical, radiologic and histopathologic techniques are described. 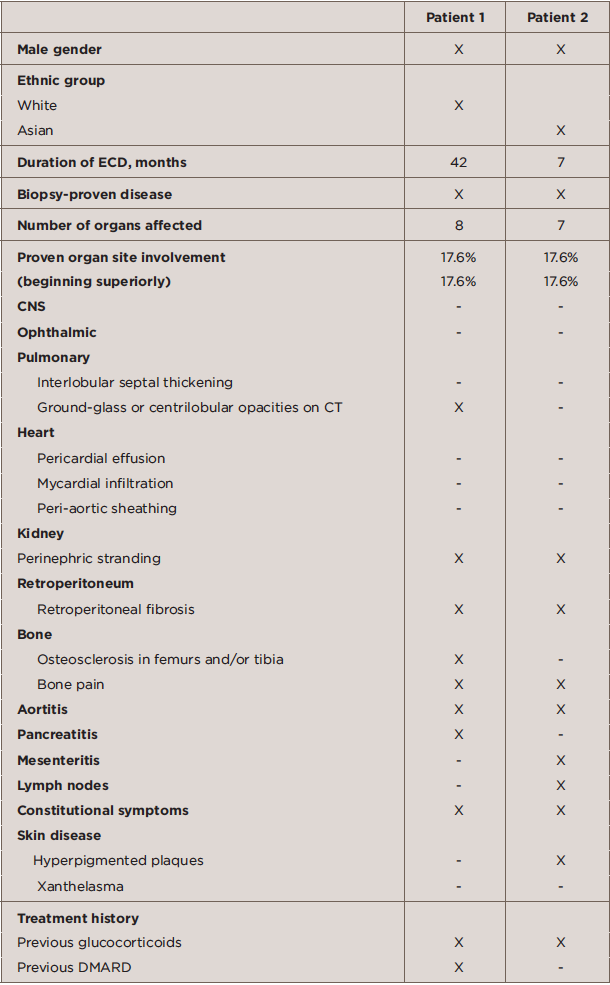