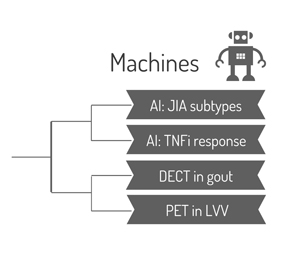 Editor’s note: RheumMadness is the place for everyone crazy about rheumatology to connect, collaborate, compete and learn together. During RheumMadness, rheumatology concepts represent teams that compete against each other in a tournament, much like basketball teams do in the NCAA’s March Madness tournament. In a series for The Rheumatologist, readers will get a chance to read the scouting reports for each concept team. These reports are written by rheumatology fellows from 13 programs throughout the U.S.

Machine learning, artificial intelligence (AI)—these phrases may spark images of Arnold Schwarzenegger as the time traveling AI from The Terminator. Thankfully, the machine learning we’re talking about is much more benign. Whew.

Briefly, machine learning is the concept that a computer system may be able to learn and adapt by using algorithms and statistical models to analyze data patterns and come to conclusions rather than being directly instructed. Thus, the machine learns by analyzing more and more examples—not hard and fast rules.

Our base article by Tao et al. examines the use of machine learning to predict tumor necrosis factor inhibitor (TNFi) response in patients with rheumatoid arthritis (RA).1 In the management of RA, TNFi therapy is an often-used, step-up therapy from conventional synthetic disease-modifying anti-rheumatic drugs (DMARDs). Unfortunately, approximately 30% of patients do not respond well to initial TNFi therapy, and no clinical data exist to predict response status.

The authors of this study sought to improve the rate of response to TNFi therapy by generating patterns of gene expression and DNA methylation in different immune cells in responders and non-responders to adalimumab and etanercept. By identifying differentially expressed genes and differentially methylated positions in the immune cells of responders and non-responders, the researchers created a machine learning model to accurately predict a patient’s response status.1