Figure 1: MRI of the spine

Sjögren’s syndrome is a chronic multi-system autoimmune disease characterized by inflammation and subsequent destruction of exocrine glands. Sjögren’s syndrome can present with glandular or extra-glandular manifestations. Neuromyelitis optica spectrum disorder (NMOSD) is a rare central nervous system (CNS) autoimmune disease that can present as the initial manifestation in less than 5% of patients with Sjögren’s.

It is important to recognize relationships between autoimmune diseases, especially Sjögren’s syndrome and NMOSD. This rare association requires a high degree of suspicion in a patient with Sjögren’s syndrome with a suggestive clinical presentation and imaging findings.

Here, we present an interesting case of NMOSD in a Sjögren’s syndrome patient.

On physical examination, she had bilateral lower extremity flaccid paralysis, absent bilateral patellar and Achilles tendon reflexes, and loss of sensation for pain, temperature, light touch, vibration and joint position sense below the T4 level. All other system reviews were unremarkable.

Based on the 2015 revised criteria by the International Panel for NMO Diagnosis (IPND, see Table 1), a diagnosis of NMOSD was made.

The patient was initially treated with intravenous dexamethasone and tapered to 40 mg of oral prednisone daily. She received IV antibiotics due to an initial concern for infection, which was discontinued when her CSF culture proved negative. Additionally, she underwent five cycles of plasmapheresis. Her weakness did not improve during hospitalization, so she was transitioned to acute rehab to follow up in the rheumatology clinic for initiation of subcutaneous tocilizumab.

(click for larger image) Table 1: NMOSD Diagnostic Criteria for Adults by the IPND1

NMOSD is a rare autoimmune demyelinating disease of the CNS. It is characterized by episodes of unilateral or bilateral optic neuritis and longitudinally extensive (LETM; three or more vertebral segments) transverse myelitis, as well as brain stem and hypothalamic lesions.1 It is also known as Devic’s disease, because Eugene Devic was the first to provide a systematic description of it in 1894.2

NMOSD is distinct from multiple sclerosis (MS) and is associated with an anti-aquaporin-4 IgG antibody that targets AQP4 channels, the primary CNS water channel that is expressed on the astrocytic foot processes. Studies have suggested this antibody may play a role in the disease pathogenesis. It appears to be involved in the destruction of AQP4 channels on the astrocyte foot processes by complement-dependent cytotoxicity, cytokine release and blood-brain barrier disruption. This leads to oligodendrocyte death and the observed neurological manifestations of NMOSD.3 The presence of anti-AQP4 antibodies is associated with either a relapsing or refractory disease course. However, it does not correlate with disease activity, so it can’t be used as a marker of response to therapy.4

AQP4-IgG serology was incorporated into NMO diagnostic criteria in 2006. In 2007, the term neuromyelitis optica spectrum disorder was introduced to include isolated unilateral or bilateral recurrent optic neuritis, as well as recurrent transverse myelitis and myelitis associated with autoimmune conditions, such as Sjögren’s syndrome and systemic lupus erythematosus (SLE).5

The diagnostic criteria were revised by the IPND for NMOSD in 2015 to include both NMOSD with and without AQP4-IgG. The IPND-consensus diagnostic criteria for NMOSD appear in Table 1 (p. 21). In the presence of anti-AQP4 IgG, one of the six core clinical characteristics is needed for the diagnosis. However, patients who lack AQP4-IgG must have two or more core clinical characteristics with other MRI findings.1

Zekeridou et al. indicated an elevated anti-AQP4-IgG antibody has a sensitivity of approximately 80% and specificity greater than 95% in the diagnosis of NMOSD.7 Myelin oligodendrocyte glycoprotein (MOG) antibody may be present in NMOSD patients with negative anti-AQP4-IgG antibody.8 CSF fluid analysis is critical to exclude infections. CSF in 50% of NMOSD patients contains elevated white blood cell counts during acute flares. CSF protein may be elevated. IgG oligoclonal bands in CSF, which are the hallmark of MS, are typically absent in NMOSD.9

Spinal MRI reveals increased signal on sagittal T2-weighted STIR sequences extending over three or more complete vertebral segments and gadolinium enhancement on T1-weighted sequences. Typical NMOSD lesions are large, continuous and located centrally in the corticospinal tract. Lesions may also appear in the hemispheric cerebral white matter, the periependymal region in the diencephalon, the dorsal brain stem and the white matter adjacent to lateral ventricles. In contrast, MS lesions are small, ovoid, present in the cortical and juxta­cortical region, and perpendicularly oriented to the surface of the lateral ventricle. 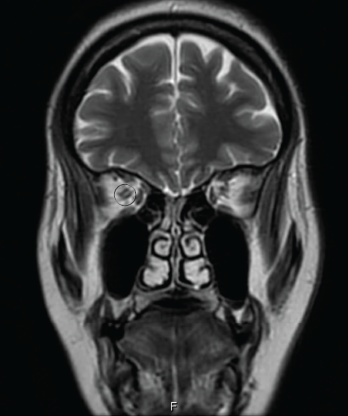 NMOSD is a rare autoimmune demyelinating disease of the CNS. It is characterized by episodes of unilateral or bilateral optic neuritis & longitudinally extensive (three or more vertebral segments) transverse myelitis, as well as brain stem & hypothalamic lesions.

NMOSD is a rare, demyelinating, inflam­matory disorder that can coexist in patients with Sjögren’s syndrome. It is a separate clinical diagnosis and not a direct neurological manifestation of Sjögren’s syndrome. The presence of an anti-AQP4-IgG antibody helps in the diagnosis. Immunosuppressive therapy, such as mycophenolate, azathioprine and rituximab, prevents long-term neurological sequelae, but plasmapheresis is preferred if there is any concern for coexisting infections. IL-6 inhibitors can be used in patients with active or relapsing NMOSD.

Swosti Roka Magar, MD, is a rheumatology fellow at the University of Arkansas for Medical Sciences, Little Rock.

Gita Verma, MD, is a rheumatology fellow at the University of Arkansas for Medical Sciences, Little Rock.

Aaroop Haridas, MD, is an assistant professor in the Division of Rheumatology at the University of Arkansas for Medical Sciences, Little Rock.