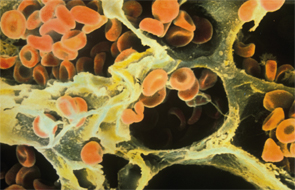 We report the case of a 43-year-old Guatemalan male with no significant past medical history who presented with a six-month history of progressive dyspnea, pleuritic chest pain and intermittent hemoptysis. On the day of presentation, he had sudden worsening of his cough and shortness of breath with frank hemoptysis. He had no bleeding or bruising at other sites. He also reported decreased appetite and increased fatigability, and had lost about 25 lbs. in the past year. He had no fever, chills or night sweats. There were no sick contacts, and he had not traveled recently. He had no history of prior surgical procedures and takes no medication except for the inhalers that were prescribed recently by another practitioner. There were no known drug allergies and no family history of cancer, bleeding disorders or other illnesses. He had a 10 pack-year history of cigarette smoking and quit about one month before presentation due to his progressive dyspnea. He used alcohol on the weekends, but did not use illicit drugs. He worked in a feather dye factory for 15 years, where he was exposed to sulfuric acid and ammonia.

On presentation, he was tachypneic, tachycardic, afebrile and normotensive, with no orthostatic change. In the emergency department, he was noted to have a cough productive of frothy bright red sputum. Oxygen saturation was 91% while breathing ambient air. His physical examination was significant for bilateral crackles and wheezing on lung examination and mild hepatomegaly. He had no lymphadenopathy. Initial investigations (see Table 1) revealed anemia, thrombocytopenia, mild leukocytosis, an activated partial thromboplastin time (aPTT) of 77.5 seconds, prothrombin time (PT) of 15.7 seconds and an international normalized ratio (INR) of 1.73. His electrocardiogram showed sinus tachycardia at a rate of 143 beats per minute without ST changes, and his chest radiograph showed bilateral predominantly perihilar alveolar opacities.