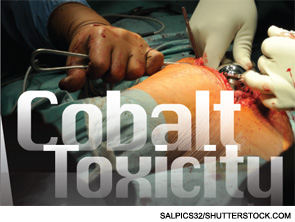 “One of the things that I thought was very poignant about the case I presented is that this patient was a rheumatologist,” Dr. Bunning says. “Rheumatologists pay pretty close attention to aches and pains,” but despite that, it took months to attain a diagnosis. The patient’s symptoms included fatigue, rashes, spasms of the left thigh and gluteal muscles with standing and progressive hip pain, “but he wasn’t thinking, ‘My hip is poisoning the rest of me,’” Dr. Bunning explained.

On Oct. 5, 2012, the patient’s orthopedic surgeon ordered an MRI, which showed synovial thickening and inflammation in the left hip. Two aspirations of the hip were culture negative. Another consulting orthopedic surgeon had written a paper about cobalt toxicity and was certain of the diagnosis: adverse reaction from metal debris.

The case presented in The Lancet involved a 55-year-old man.2 He underwent hip surgery in November 2010 to replace his left hip ceramic implant with a metal-on-polyethylene implant.

In May 2012, the patient presented with severe heart failure and hypothyroidism, and his estimated ejection fraction by echocardiography was 25%. A radiograph of the left hip showed a myositis ossificans-like picture that was attributed to metal debris. The patient’s heparin‑blood cobalt and chromium levels were significantly increased at 15,000 nmol/L (normal <15•3 nmol/L) and 942 nmol/L (normal <9•6 nmol/L), respectively.

The patient was referred to his orthopedic surgeon and underwent surgery to replace his hip prosthesis. The metal head of the hip prosthesis was severely damaged, likely because of remaining ceramic particles from the replacement procedure in 2010. The patient also had a cardioverter-defibrillator implanted to address severe heart failure.

Fourteen months after the metal hip was removed, the patient’s heparin-blood concentrations of cobalt and chromium were 1,460 nmol/L and 365 nmol/L, respectively. His cardiac function had improved to a 40% ejection fraction.

She presented to her primary care physician with a cough, exertional dyspnea and foot swelling that had developed two weeks earlier. She was diagnosed with pneumonia and “travel-related edema” and treated with antibiotics. In the subsequent 12 months, she continued to experience progressive dyspnea, edema and fatigue, and an episode of ventricular tachycardia. Subsequent treatments included medication for new-onset heart failure, a procedure for an implantable cardioverter-defibrillator, a procedure to implant a left ventricular assist device and a heart transplant. Two months after her heart transplant, she was recovering as expected, but her labs showed evidence of hypothyroidism that was attributed to amiodarone. She also developed cataracts and progressively worsened in the subsequent months.

Seven months after transplantation, the patient underwent hip imaging and measurement of serum cobalt levels because of safety concerns with her prosthesis. Pelvic MRI showed bilateral thin-walled fluid collections caused by a reaction to the metal implants, and her serum cobalt level was 287.6 mcg/L (reference value <1.0). Eleven months after heart transplantation, the patient’s original left hip prosthesis was replaced. Nine weeks later, she underwent another procedure to replace her right hip prosthesis.

After both hip implants were replaced, the patient’s serum cobalt levels rapidly decreased and her left ventricular ejection fraction returned to normal. She also reported feeling stronger each day.

The remarkable nature of these case studies is that ‘hip pain was not a prominent feature,’ Dr. Bunning says.

Absorbing a large amount of cobalt over long periods of time can lead to significant health issues.6 Two telling symptoms are cardiomyopathy and hypothyroidism, Dr. Bunning noted, but additional signs and symptoms may include lassitude; neuropathy, including loss of taste, smell and hearing; focal and diffuse weakness; and rashes.

Before the three cases presented in early 2014, cobalt toxicity has been reported in the literature. Perhaps the seminal report was of the so-called Quebec beer-drinkers’ cardiomyopathy.7 In the 48 cases reported in 1967, the patients preferred the same brand of beer, which investigators learned used cobalt sulfate to improve the stability of the foam. In 2011, an Australian report was published telling of two patients who experienced cobalt toxicity from metal-on-metal total hip replacements.8

When the components of metal-on-metal hip prostheses rub together, they can shed metal ions that enter the bloodstream, Dr. Bunning explained. Somewhat of a surprise, he added, is that corrosion at the modular junction in metal-on-polyethylene implants can cause the same issue. A 2012 paper showed that in 15 cases, corrosion at the head–neck taper of metal-on-polyethylene implants can cause adverse local tissue reactions, including elevated serum cobalt and chromium levels.9

Cobalt toxicity related to hip implants is likely to become more prevalent, Dr. Bunning says, especially because it has been determined that in addition to metal-on-metal prosthetics, cobalt toxicity is also a possible complication of metal-on-polyethylene implants.

The potential issues of metal-on-metal implants recently garnered the attention of the U.S. Food and Drug Administration, which issued a safety communication in January 2013.10 The FDA’s recommendation is to conduct “follow-up of asymptomatic patients with metal-on-metal hip implants, including physical examinations and routine radiographs” about every one to two years. If the hip is performing normally, the FDA stated it is unnecessary to “routinely perform additional soft tissue imaging or assess metal ion levels in the blood.”

The FDA further noted that patients who are at risk for “increased device wear and/or adverse local tissue reactions should be followed more closely.” Those identified as being at higher risk are:

“As a practicing rheumatologist, I would say [that for] any patient you see who has new-onset thyroid disease or unexplained heart failure and [has] either a metal-on-metal or metal-on-polyethylene joint, think about metal poisoning,” Dr. Bunning recommends. For rheumatologists, if a patient with an artificial hip has hip pain, “the usual reflex is to send [the patient] back to the orthopedic surgeon,” he says. However, rheumatologists also may opt to order a cobalt level or MRI with the appropriate sequences. If cobalt levels come back elevated or the MRI is abnormal, he says, it’s appropriate to work together with the orthopedic surgeon to manage the patient’s treatment.

Kimberly J. Retzlaff is a medical journalist based in Denver.

Acknowledgment: The author and The Rheumatologist thank Dr. Bunning for his assistance in the development of this story.