A 51-year-old Caucasian female was referred by a local rheumatologist to the Center of Autoinflammatory Diseases at Stony Brook University, N.Y., for an unusual disease presentation. The patient had had recurrent polyarthritis, fever and rash for the previous three years. She described having a migratory polyarthritis affecting the shoulders, knees, ankles and bilateral forefoot, with swelling and variable morning stiffness.

The patient also reported recurrent fever that reached a maximum of 102°F and rash. Febrile episodes were self-limiting, lasting for 24–48 hours and recurred three or four times a year, often around the same dates in April and August. The fever was accompanied by erythematous and swollen patches on her face, eyelid swelling with discoloration and hive-like patchy erythema on her abdomen and gluteal regions (see Figure 1). The episodes of rash often lasted 24–72 hours, with spontaneous resolution.

Her constitutional symptoms included flu-like symptoms and fatigue. She had gained weight over the three years.

Her significant past medical history was recurrent urinary tract infections and bilateral nephrolithiasis with multiple stenting and lithotripsies when she was in her 30s. She also reported intermittent abdominal pain with nonbloody diarrhea and constipation for several years with prior negative gastrointestinal workup. There was no family history of autoimmune diseases or periodic fever syndromes.

The physical examination showed obesity with body mass index of 35.0 kg/m² without active rash, synovitis or abdominal tenderness. Otherwise, it was unremarkable. 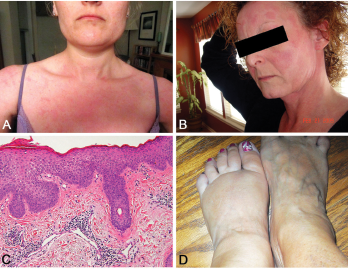 Figure 2. A and B: erythematous patches and plaques; C: spongiotic dermatitis (HE staining, 20X: epidermal hyperplasia with spongiosis and overlying hyperkeratosis and parakeratosis, as well as perivascular lymphocytic infiltrate); D: distal extremity swelling.

Other tests were normal, including thyroid-stimulating hormone, parathyroid hormone and angiotensin-converting enzyme. Radiographs of hands and feet were unremarkable as was prior chest-computed tomography. She was treated for possible seronegative arthritis with only nonsteroidal anti-inflammatory drugs without improvement.