Sarcoidosis is a multisystem disease of unknown origin characterized by noncaseating granulomas in involved organs. This disease primarily affects the lungs in more than 90% of cases, but extrathoracic manifestations such as cutaneous, lymphatic system, ocular, and liver involvement are commonly present.1 Patients may be asymptomatic at presentation or may have nonspecific symptoms such as fever, malaise, cough, and dyspnea on exertion.1

The diagnosis of sarcoidosis is established when the clinical and radiologic findings are supported by histological evidence of noncaseating epithelioid cell granulomas, once all the other causes of granulomatous conditions have been ruled out.2

Although the complete pathophysiology of sarcoidosis is not well understood, it is known that tumor necrosis factor (TNF)–α plays a major role in sarcoidosis development, and TNF-α inhibitors have been used for the treatment of refractory sarcoidosis.3,4 In contrast, a few case reports have described a paradoxical effect, with TNF-α inhibitor therapy leading to the development of granulomatous disease or sarcoidosis.

Here we describe new cases of sarcoidosis in two psoriatic arthritis patients treated with TNF-α inhibitor therapy. The first patient was treated with etanercept and the second with adalimumab. 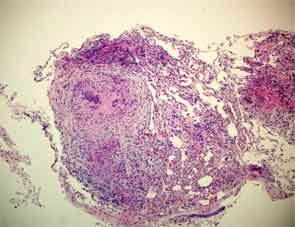 A 47-year-old white man with longstanding psoriasis involving mainly his scalp, abdomen, and back and arthritis involving mainly his metacarpophalangeal and proximal interphalangeal joints, wrists, and knees was followed in our rheumatology clinic. He was treated with methotrexate but continued to experience intermittent flares of the rash and arthritis for which he required multiple doses of prednisone or intraarticular corticosteroid injections. Methotrexate was subsequently discontinued due to a persistently elevated serum alkaline phosphatase. Etanercept 50 mg subcutaneously weekly was started in April 2005 and there was marked improvement and remission of both psoriasis and joint disease.