You are here: Home / Articles / The Future of Pediatric Rheumatology Grounded in Evolution of Childhood Arthritis and Rheumatology Research Alliance
Print-Friendly Version / Save PDF 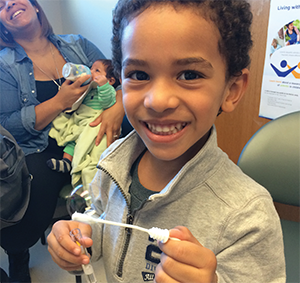 Pediatric rheumatology was formally recognized as a specialty in 1991 by the American Board of Pediatrics.
Yukiko Kimura, MD

Pediatric rheumatology was formally recognized as a specialty in 1991 by the American Board of Pediatrics. Prior to this time, children with rheumatic diseases were treated by a hodgepodge of providers. In addition to providers who had training as pediatric rheumatologists, general pediatricians, adult rheumatologists, allergist-immunologists, orthopedists, pediatric infectious disease specialists and others treated children with rheumatic diseases. As a result, there was little advocacy or research in the field and little consistency in treatment approaches.

It was not until the late 20th century, with clear successes treating children with cancer through the development of several pediatric oncology networks working to standardize, protocolize and study treatments for all children with specific cancers, that the importance of evidence-based treatment approaches was recognized by healthcare providers and families.

The passage of national legislation mandating the study of new pharmaceuticals in children as part of FDA approval packages and the success of methotrexate and later anti-TNF agents in the treatment of rheumatoid arthritis also highlighted the need and opportunities for ongoing clinical and translational research in the field of pediatric rheumatology.

The Childhood Arthritis & Rheumatology Research Alliance (CARRA) began in 2000 as a grassroots initiative among a small number of pediatric rheumatologists in the U.S. and Canada seeking to establish an inclusive, collaborative research network. The overall mission and supporting guiding principles that outlined scientific, leadership and operational elements were crafted at a meeting in 2001, and the initial scientific agenda and criteria for studies to be undertaken by the network were established in 2002.

CARRA was envisioned as a network that would enable widespread research participation, thereby ensuring the future of academic pediatric rheumatology, which was endangered at the time. Three crucial components were identified at the meeting that continue to form the bedrock of the current organization:

The annual face-to-face scientific working meeting then became a crucial component of CARRA’s operation, fostering a culture of collaboration and research among the entire pediatric rheumatology community.