You are here: Home / Articles / How Do Axial SpA & PsA with Axial Involvement Differ?
Print-Friendly Version / Save PDF 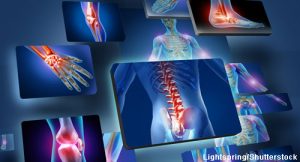 ACR CONVERGENCE 2021—Although both axial spondyloarthropathy (axSpA) and axial involvement in psoriatic arthritis (axPsA) fall under the umbrella of the seronegative spondyloarthropathies, the differences between axSpA and axPsA affect their management. During a session of ACR Convergence 2021, three experts helped attendees better understand the distinctions and their implications.

Nigil Haroon, MD, PhD, DM, FRCPC, co-director of the Spondylitis Program at the University Health Network, and associate professor of medicine and rheumatology, University of Toronto, Canada, began the session by discussing the prevalence of axial involvement in SpA and PsA.

AxSpA and axPsA also differ in their phenotypes. Dr. Haroon noted that in axPsA, syndesmophytes tend to be bulkier and asymmetric, with earlier neck involvement. On the other hand, syndesmophytes in axSpA are finer and more symmetric.1 Severe and symmetrical sacroiliitis, ligamentous ossification and bamboo spine are more common in axSpA. These differences have been confirmed by studies examining radiologic changes in classic ankylosing spondylitis vs. other seronegative spondyloarthropathies. However, he took care to note that almost all the studies we have to answer this question are cross-sectional.2

Dr. Haroon next discussed the pathological basis of axSpA and axPsA.

“We know that there is variability in treatment response, depending on what clinical manifestations are present—uveitis, psoriasis or axial disease, for example—but why do they exist?” he asked. “The main genetic overlap between ankylosing spondylitis and PsA seems to be HLA-B27, but genetic studies alone don’t explain why axSpA and axPsA behave differently. HLA-B27 negative axPsA looks completely different from HLA-B27 positive axPsA. Isolated spondylitis is much more common in the former.”3

Anna Molto, MD, PhD, Cochin Hospital, Paris, spoke next, focusing on the clinical presentation of axSpA and axPsA. “Psoriatic spondylitis and axial PsA are actually not new concepts and were introduced as early as 1988.4 So is axSpA with skin psoriasis and peripheral arthritis different than axPsA?” she asked. “These are more or less different words to describe the same clinical phenotype.”