You are here: Home / Articles / How to Manage Pain in Patients with Renal Insufficiency or End-Stage Renal Disease on Dialysis
Print-Friendly Version / Save PDF 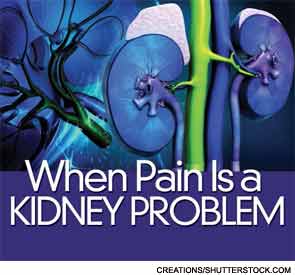 A 70-year-old male with end-stage renal disease (ESRD) on hemodialysis presents with methicillin-resistant Staphylococcus aureus (MRSA) bacteremia and ankle pain after a fall. An MRI of his ankle is negative, and he is started on acetaminophen and lidocaine patches, which result in adequate pain relief of the ankle. He later develops significant neuropathic pain in both arms, and a CT scan of the cervical spine reveals a cervical abscess and osteomyelitis. The patient desires pain relief but adamantly refuses narcotics, stating: “I don’t want to get addicted.” How can his pain be managed?

Pain is a common problem in patients with renal insufficiency and ESRD, and can have a significant effect on the patient’s quality of life.1 When assessing a patient’s pain, assess both the severity of the pain (such as on an analogue scale, 0–10) and the characteristics of the pain. Pain is most commonly characterized as nociceptive, neuropathic, or both. Nociceptive pain can be further classified as arising from either somatic or visceral sources, and is often described as dull, throbbing, cramping, and/or pressurelike.1 Neuropathic pain is often described as tingling, numbing, burning, and/or stabbing.

It is a challenge to manage pain in patients with renal insufficiency and dialysis. Renal insufficiency affects the pharmacokinetic properties of most pain medications, including their distribution, clearance, and excretion. The magnitude of the effect of renal insufficiency on drug metabolism varies depending on the agent itself, its metabolite, and the extent of renal failure.3 Multiple factors should be considered when prescribing pain medications for patients on dialysis, including the properties of the parent drug and its metabolites; the physical properties of the dialysis equipment, such as the filter pore size, the flow rate, and the efficiency of the technique used; and the dialysis method (intermittent versus continuous).3 Table 1 provides the recommended dosing of the most commonly prescribed agents, based on the degree of renal impairment. A modified World Health Organization (WHO) ladder has been suggested to treat pain in patients with ESRD, which can lead to effective pain relief in as many as 96% of patients (see Figure 1).2 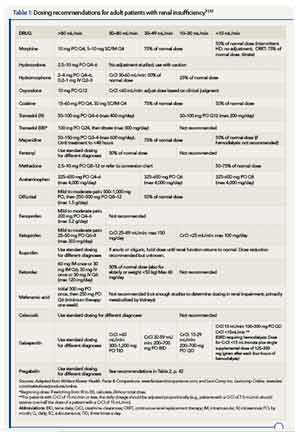 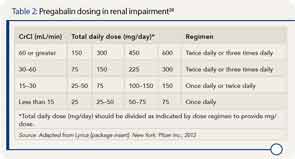 Nonopioid options. Nonopioids, such as acetaminophen and nonsteroidal antiinflammatory drugs (NSAIDs), have no associated tolerance but have a ceiling effect for analgesia, and NSAIDs are associated with dose-dependent acute renal failure, gastrointestinal ulceration and bleeding, and cardiac events. The nonopioids that are considered safe options in patients with renal insufficiency include acetaminophen, ibuprofen, and fenoprofen (Nalfon). However, in the elderly, American Geriatric Society (AGS) guidelines currently recommend avoiding all NSAIDs due to their safety profile in the geriatric population.4 Although all NSAIDs can potentially be used for pain, selected NSAIDs with a Food and Drug Administration (FDA) indication for acute or chronic pain were included for this review.