While looking into IgG glycosylation in juvenile idiopathic arthritis (JIA)—in which they found that JIA IgG appears “supercharged” through an excess of G0 and other pro-inflammatory glycans—researchers saw that, in adult healthy controls, G0 levels rose sharply around age 50 in women.

To explore a potential link with menopause, Dr. Nigrovic and colleagues drew from several intervention cohorts in which levels of estrogen were modulated experimentally. Postmenopausal women randomized to estrogen agonists showed a reduction in G0 glycans; however, women randomized to placebo did not.

In a second cohort, premenopausal women were treated with leuprolide, a GnRH agonist that temporarily induces a post-menopausal state, and then randomized to either placebo or estradiol, a form of estrogen. Among those who received placebo, levels of proinflammatory G0 glycans increased. There was no increase among those who received estradiol. Researchers found that estrogen has a similar effect in men, in whom estrogen is derived in large part from conversion of testosterone.

“These data establish conclusively that estrogen drives IgG glycosylation in both women and men, representing a previously unknown link between sex and immunity,” Dr. Nigrovic said. “However, we don’t yet know if this effect reflects direct action of estrogens on B cells or rather an indirect effect mediated by other types of cells.”

Dr. Nigrovic said that the physiological relevance of this estrogen role “remains to be determined.” Because glycans play a key role in the ability of antibodies to cause inflammation, he expects that immune consequences are likely, both for high-estrogen states, such as pregnancy, and low-estrogen states, such as menopause. He also expects the observations to have implications for therapeutic manipulation of hormone levels in both women and men.

The work will be published soon in JCI Insight, he said. 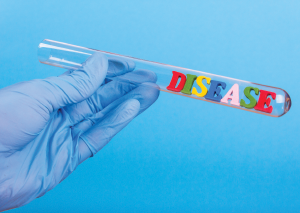 At Northwestern University, a lab led by Harris Perlman, MD, the chief of rheumatology there, has shown how macrophages have a constantly changing role in the spectrum of RA, from the induction of disease to continuation of disease and the resolution of disease.

Their work has shown how the transcriptional profiles of synovial macrophages change over time. Researchers are now expanding the populations of the macrophages they’re studying as they look to develop gene signatures in those populations and determine how they relate to disease development.