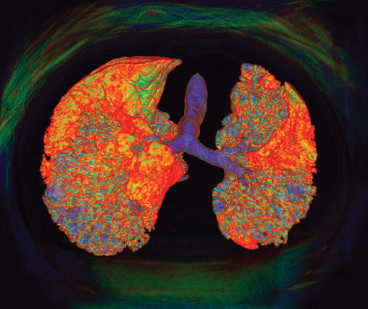 MADRID—Rheumatoid arthritis (RA) is among the most common autoimmune diseases in the U.S., affecting approximately 1.3 million U.S. adults.1 Although tremendous treatment advances have been made in recent years, one extra-articular manifestation of RA that continues to pose a challenge with regard to detection and management is interstitial lung disease (ILD).

At the 2019 European Congress of Rheumatology (EULAR), June 12–15, during a session titled, The Lung in Rheumatoid Arthritis, Iván Castellvi, MD, PhD, associate professor at the Universitat Autónoma, Barcelona, Spain, described the issues facing clinicians regarding ILD in RA. Dr. Castellvi began by noting that not all lung involvement in RA is ILD. Other diseases of the lung parenchyma in RA include rheumatoid nodules, drug-induced pneumonitis and infections or malignancies that may or may not be directly related to RA and its treatment. Airway disease in RA can include follicular bronchiolitis, obliterans bronchiolitis, bronchiectasis and arthritis of the cricothyroid joint. Vascular disease of the lung can manifest as pulmonary hypertension, pulmonary vasculitis and thromboembolic disease. Additionally, miscellaneous conditions can include Caplan’s syndrome, which describes the combination of RA and pneumoconiosis that manifests as intrapulmonary nodules that appear homogeneous and well defined on chest radiography.

Dr. Castellvi noted the evaluation of lung disease in RA patients involves assessing risk factors for the development of ILD, such as male sex, tobacco use, seropositivity for rheumatoid factor and/or the presence of antibodies to cyclic citrullinated peptide (anti-CCP) and disease severity.

The role genetics may play in this process was outlined in a 2018 article in The New England Journal of Medicine, marking an important contribution to this understanding. Given the phenotypic similarities between RA-associated ILD and idiopathic pulmonary fibrosis (IPF), the authors hypothesized the strongest risk factor for developing IPF—the gain-of-function MUC5B promoter variant rs35705950—may also be a risk factor for ILD in RA patients. In this study, more than 600 RA patients with ILD, 600 RA patients with no ILD and 5,400 unaffected controls were compared. The research showed the minor allele of the MUC5B promoter variant was associated with ILD in RA patients and that the MUC5B promoter variant was associated with an increased risk of ILD among RA patients, particularly those with a usual interstitial pneumonia (UIP) pattern on computed tomography (CT) imaging of the lungs.2

Although these associations need further exploration, it’s helpful for clinicians to begin to understand the genetic underpinnings that may promote ILD development in RA patients. Such genetic information may become more widely accessible as more patients undergo genome sequencing.

Currently, ILD is primarily detected in patients with CT imaging of the lungs. The pattern found in imaging studies can be significantly helpful in evaluating which underlying connective tissue disease may be at play. Although a non-specific interstitial pneumonia pattern is common in such conditions as systemic sclerosis, systemic lupus erythematosus, myositis and Sjögren’s syndrome, only RA is known to manifest ILD most frequently in a UIP pattern. Such an association is relevant to clinicians because ILD may precede the development of overt clinical signs of an associated connective tissue disease. Thus, ILD in a UIP pattern may herald the onset of RA more so than other related conditions.

On high-resolution CT imaging, UIP classically demonstrates a honeycombing: clustered cystic air spaces of 2–10 mm in diameter with well-defined walls. The affected areas are most commonly located in the subpleural regions and bases of the lungs. In his lecture, Dr. Castellvi recommended that RA patients undergo lung imaging and/or pulmonary function testing at the onset of their disease, regardless of pulmonary symptoms. This approach establishes a baseline for lung involvement and creates a reference point if symptoms develop in the future.

As many rheumatologists are aware, most conventional and biologic disease-modifying anti-rheumatic drugs (DMARDs) used to treat RA can induce alveolar inflammation, interstitial inflammation and/or interstitial fibrosis. Thus, the question of drug-induced lung disease in RA is poignant after a patient starts such a medication.

Methotrexate, one of the most commonly used medications to treat RA, is known to induce hypersensitivity pneumonitis in about 0.43% of patients.3 Typically, this condition occurs within the first year of treatment and is subacute, with a progression of symptoms over days to weeks. Awareness of this phenomenon has resulted in concerns that methotrexate may be associated with an increased incidence or exacerbation of ILD in RA patients.

To further explore this issue, researchers recruited 2,700 patients with early RA and used univariate, multivariate, time-varying and time-to-event Cox proportional
hazards analyses to assess methotrexate exposure and other factors that may be associated with a diagnosis of ILD in these patients. The study showed no association in the primary analysis between methotrexate exposure and the incidence of ILD in this population. In fact, methotrexate exposure was associated with significantly less ILD in these patients.4 Additional studies are needed to further evaluate the potential risks or benefits of using various DMARDs in RA patients both with and without active ILD.

Dr. Castellvi concluded his remarks with a photo of his interdisciplinary clinical team, stressing the importance of collaboration between rheumatologists, pulmonologists, radiologists and others to identify ILD in RA patients and establish best steps for management. Such discussions are not purely academic. Dr. Castellvi noted the risk of death in RA patients with ILD is up to three times higher than that of RA patients without ILD.5 Therefore, it’s important to breathe new life into this discourse and continue to seek an understanding of the role ILD can and does play in the lives of RA patients.

Jason Liebowitz, MD, recently completed his fellowship in rheumatology at Johns Hopkins University, Baltimore, where he also earned his MD. He is currently in practice with Arthritis, Rheumatic, and Back Disease Associates, New Jersey.