You are here: Home / Articles / Know Your Labs
Print-Friendly Version / Save PDF

This is Part One of a two-part series. Part Two, on rheumatoid factor and anti-cyclic-citrullinated peptide, will appear in the April issue of The Rheumatologist.

Laboratory testing is an essential element in the diagnosis and management of patients with rheumatic disease. This article focuses on a diverse array of serological markers that can provide unique information on the status of the patient’s immune system that is important in clinical evaluation as well as scientific inquiry. These tests help in the diagnosis of a particular disease and, importantly, they may help monitor disease activity. Indeed, immunological testing represents one of the bedrocks of rheumatology and is a distinguishing feature of our specialty.

While there are many available tests, the approach to serology follows the traditional approach of any laboratory study. Critical in the interpretation of any serological test is determining its sensitivity (e.g., that proportion of patients with the target disorder who have a positive test), specificity (e.g., that proportion of patients who are free of the target disorder and have negative or normal test results), and positive and negative predictive values, which calculate the likelihood that disease is present or absent based on test results using the test’s sensitivity, specificity, and the probability of disease before the test is performed (pretest probability). This review will cover data on antinuclear antibodies (ANAs).

ANAs are the signature autoantibodies of the rheumatic disease and are tested in many clinical scenarios.1-3 These antibodies are usually detected by immunofluorescent (IF) techniques, utilizing Hep-2 cell lines, and specific antinuclear antibodies are detected by solid-phase immunoassays—for instance, an ELISA. The IF ANA is generally screened at a dilution (e.g., titer) of 1:40, and, if positive, serial dilutions are carried out until a dilution is negative. Most labs titer to 1:1280, but some go higher. It is not clear whether titering higher is clinically useful, because the titer of an ANA usually does not correlate with clinical activity.

The IF ANA test is especially useful as an initial screen for patients suspected of having systemic lupus erythematosus (SLE). ANA testing is also useful for the evaluation of patients with other suspected rheumatic conditions including Sjögren’s syndrome, mixed connective tissue disease (MCTD), drug-induced lupus erythematosus, dermato/polymyositis, scleroderma, adult and juvenile arthritis, and autoimmune hepatitis. However, the presence of an ANA does not signify the presence of illness, because these antibodies may also be found in otherwise normal individuals. As shown in Table 1 (see p. 17), the sensitivity of the ANA for a particular autoimmune disease can vary widely.

Other well-recognized conditions that are occasionally associated with a positive ANA include chronic infectious diseases, such as mononucleosis, subacute bacterial endocarditis, and tuberculosis; some lymphoproliferative diseases; and up to 90% of patients taking certain medications, especially procainamide and hydralazine. However, most of the patients who take these medications and develop a positive ANA test do not develop clinical drug-induced lupus.

False-positive ANAs (i.e., ANAs in the absence of autoimmune disease or other diseases) are commonly found in normal women, elderly individuals, and first-degree relatives of patients with ANA-positive autoimmune diseases (typically in low titer). There are several important points about ANA that should be considered in the clinical setting.

TABLE 1: Sensitivity of the ANA in Autoimmune and Nonrheumatic Disease

Over the last few years, investigators and biotech firms have been developing solid-phase immunoassays to replace the IF ANA test.4-23 The rationale behind this attempt relates to performance characteristics of the IF technique. This test is very labor intensive and is subject to variation due to different interpretations by technicians. Also complicating testing is the fading of the image as it is examined in a fluorescent microscope. Furthermore, the IF technique uses serial dilutions of patient sera, which will give results that may not be linear. Variations in titer by two-fold are common in day-to-day testing on the same sample; four-fold differences are said to be “significant.” By contrast, solid-phase immunoassays are automated and highly reproducible. The results are linear, and the technique is less labor intensive, and thus cheaper to perform. 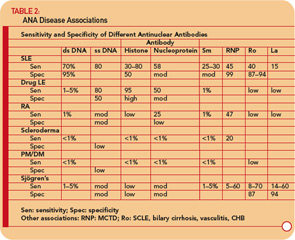 Antibodies to DNA can be primarily divided into those that react with single-stranded (ss) DNA and those recognizing dsDNA.24-26

Anti-ssDNA antibodies have been reported in SLE, rheumatoid arthritis, drug-related lupus, healthy relatives of patients with SLE, and, less commonly, in other rheumatic diseases. (See Table 2, p. 17.) Thus, anti-ssDNA has limited usefulness for the diagnosis of SLE or other rheumatic diseases. Anti-ssDNA does not correlate well with disease activity and are therefore not useful for disease management.

Antibodies to dsDNA are most frequently detected by solid-phase immunoassays, but also in some labs by the crithidia IF assay or occasionally the Farr radioimmunoassay. Most hospital and commercial labs do only one. The Farr assay probably has the highest specificity, and lowest sensitivity of the three assays for the diagnosis of SLE, while solid-phase assays have the highest sensitivity and lowest specificity; the crithidia assay falls in between. The Farr assay also has the disadvantage of using radioactive material, which most labs shun, and the crithidia test is very labor intensive. I prefer the ELISA assay for everyday use.

Anti-dsDNA are specific (95%) though not highly sensitive (70%) for SLE, making them very useful for diagnosis when positive.9 (See Table 2, p. 17.) They are occasionally found in other conditions, including rheumatoid arthritis, juvenile arthritis, drug-induced lupus, autoimmune hepatitis, and even in normal persons.

Titers of anti-dsDNA antibodies often fluctuate with disease activity, especially lupus nephritis, and are therefore useful in many patients for following the course of SLE. If a patient has a rising titer, or very high titer, but clinically is quiescent, I do not treat the serological abnormality, but consider it a warning sign that the patient needs to be followed more closely and treated when something happens clinically to warrant a change in therapy. However, some investigators have treated these serological abnormalities (especially when associated with low complement levels) and have reported improved clinical outcomes. Conversely, I use a falling titer in someone who is getting better after a flare on treatment as a guide in reducing treatment (e.g., corticosteroids and/or immunosuppressives).

Distinguishing active lupus manifestations from infectious complications or toxic effects of drugs—and from unrelated disease—is always a challenge. The presence of anti-dsDNA antibodies may be helpful in some patients in making this distinction.

Antibodies to Smith (Sm) and anti-ribonucleoprotein (anti-RNP) are most frequently detected by solid-phase immunoassays.24,27

Anti-Sm antibodies are found in only 10% to 40% of patients with SLE, but are very infrequent in patients with other conditions (i.e., they are not sensitive but are highly specific [see Table 2, p. 17]). Measurement of anti-Sm titers may be useful diagnostically, particularly at a time when anti-DNA antibodies are undetectable. Given the relatively low sensitivity of anti-Sm, however, a negative value in no way excludes the diagnosis of SLE.

Anti-RNP antibodies are found in about 40% to 60% of patients with SLE, but are not specific for SLE, being a defining feature of MCTD. These antibodies can also occur in low titers and low frequencies in other rheumatic diseases including RA and scleroderma. (See Table 2, p. 17.)

Neither the titer (levels) of anti-Sm nor anti-RNP antibodies correlates with any clinical activity.

Antibodies to Ro/SSA and La/SSB are most frequently detected by solid-phase immunoassays.28,29 Anti-Ro/SSA and anti-La/SSB have been detected in high frequency in patients with Sjögren’s syndrome and in SLE, but also in patients with photosensitive dermatitis, and in 0.1% to 0.5% of healthy adults.

In my opinion, the indications for ordering an anti-Ro/SSA and anti-La/SSB antibody tests are as follows:

Because of the low sensitivity and poor clinical correlation, many investigators—including myself—see little clinical usefulness in this test.

Anti-centromere antibodies (ACAs) are found almost exclusively in patients with limited cutaneous systemic sclerosis (lcSSc) especially in those with CREST.31 ACAs have been observed in 57% of patients with CREST but have also been seen in patients with other conditions, including in some patients with Raynaud’s phenomenon alone. ACAs are typically detected by the characteristic IF pattern on Hep-2 cells.

If one suspects SLE based on the history, physical examination, and complete blood count (e.g., leucopenia, thrombocytopenia), request an ANA test. If it is negative, it is highly unlikely that the patient has SLE, and the patient can be reassured. If the titer is <1:160, SLE is unlikely, and the patient can be reassured that SLE is unlikely, but the patient should be followed periodically. A titer of ≥1:160 increases the likelihood of SLE and related disorders. However, it is important to remember that 85% of individuals with a positive ANA do not have SLE. If the ANA is positive, one should also test for antibodies to dsDNA, Sm, RNP, Ro/SSA, and La/SSB. The presence of these antibodies greatly increases the likelihood that the patient has SLE and related disorders (see Table 2, p. 17), and the patient needs to be followed more closely. The detection of anti-centromere and anti–Scl-70 antibodies is very useful for the diagnosis of scleroderma. The detection of antibodies to Ro/SSA and La/SSB are also useful for the diagnosis of Sjögren’s syndrome.

The only one of these tests that is useful to monitor activity is the anti-dsDNA.

Acknowledgement: I am indebted to the work of many authors of UpToDate in Medicine, whose work provided a useful framework for the development of this paper, as well as to Drs. Robert Shmerling, David Lee, and Donald Bloch, with whom I have written papers and chapters on this same subject.

Dr. Schur is professor of medicine at Harvard Medical School and the division of rheumatology, immunology, and allergy in the department of medicine at Brigham and Women’s Hospital in Boston.