ATLANTA—What if efforts to regain daily function after an illness or injury felt less like a burden and more like … fun? It’s possible, with virtual reality, said Robert Ferguson, MHS, OTRL, stroke rehabilitation program manager at the University of Michigan, Ann Arbor, in a session of the 2019 ACR/ARP Annual Meeting. 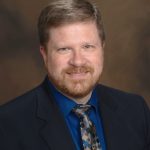 Interest in virtual reality to promote rehabilitation is spreading, Mr. Ferguson said, but he pointed to details that are often overlooked and that, if missed, could lead clinicians and therapists astray.

Still, his firsthand experience with the possible results is persuasive that virtual reality can have big effects. Engaging with a simple screen on which patients play a game that involves a motor function needing improvement can help the patient forget—or least not mind as much—that they’re making an effort, he said.

Interest in virtual reality to promote rehabilitation is spreading.

Big Effects of Virtual Reality Rehab
“You can be so involved in that virtual context that you enter that concept of ‘flow,’ and you just lose track of time and effort,” Mr. Ferguson stated. 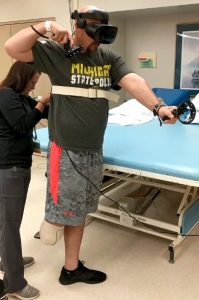 Ashlee O’Connor, MOT, OTRL, works with a patient with a below-knee amputation.

One patient with a below-knee amputation played a game in which he had to defend a castle against minions. “He was much more aware of what his intact limb was doing, and how it was reacting for balance,” Mr. Ferguson said. He got through 1,200 arm-movement repetitions in 45 minutes with improved active-balance reactions that he wasn’t demonstrating before the immersive virtual activity—great preparation in advance of his occupational therapy.

Another man understood that he was working, but didn’t seem to mind, saying, “It’s the hardest therapy I’ve ever done, but it’s the funnest,” giving Mr. Ferguson the best of both worlds: maximal effort and maximal patient satisfaction.

Another patient, recovering after a stroke, played a game involving steering a boat with a joystick, requiring pushing and contraction of the shoulder and arm: “[The] feedback is that if the boat’s not moving, they’re not pushing. I don’t have to say a word,” said Mr. Ferguson.

Some evidence suggests benefits from the judicious use of immersive virtual reality with patients with rheumatic diagnoses.1 People tend to have a lower perception of effort compared with actual exertion and lower reports of pain with longer time to exhaustion. But patients should be monitored for appropriate responses consistent with their treatment plan and activity recommendations, Mr. Ferguson said.