You are here: Home / Articles / Managing Multiple Rheumatic Diseases: How One Patient Copes with Her Disabilities & Advocates for Others
Print-Friendly Version / Save PDF 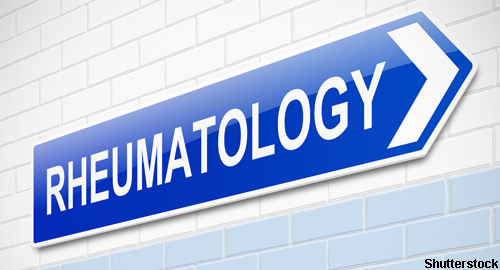 By the time Kelly Conway was diagnosed with rheumatoid arthritis (RA) in 2007, she had already been living with symptoms of the disease for 23 years. Her first symptom appeared when she was 14—knee pain that was incorrectly diagnosed as tendonitis. Over the years, she has experienced fevers and sore joints. She was diagnosed with fibromyalgia in 1993, Graves’ disease in 1999 and Sjögren’s syndrome in 2002.

Now at age 48, Ms. Conway feels fortunate to have a rheumatologist who listens to her. “I was used to specialists reading my blood work and not looking at or listening to me,” she says. “[My rheumatologist] gives me reality checks when needed and helps me improve my quality of life when possible.”

Managing Multiple Conditions
Finding a team of doctors who communicate with each other was also important, so things aren’t overlooked and Ms. Conway’s care can be coordinated.

When she experiences physical limitations, Ms. Conway meets with an occupational or physical therapist who can help modify daily tasks. They have been able to help her perform simple tasks, such as opening containers, and huge undertakings, such as taking a long-distance trip.

Ms. Conway tracks her symptoms via an app and/or journal. “Having photos of swollen joints that I take between visits helps paint a clear picture for my rheumatologist,” she says.

Despite having multiple diseases, Ms. Conway has found things she can do well. “I began to draw and paint despite my sore hands,” she says.

She once enjoyed extensive travel, home improvement projects and working out, but she has not been able to maintain that active lifestyle. As a result, it’s become important for her to be clear with friends and family about the support she needs and how she’s feeling. This approach has helped relieve stress in these relationships. She says, “People went from loving me, to pitying me, to not believing me because I don’t look sick. Everyone has advice on what you need to do to cure yourself. I had to learn what works for me.”

Her career as a speech-language pathologist has helped Ms. Conway maintain balance in her life. For rheumatology patients who can’t work, she recommends participating in a group, project or club to find fulfillment.

Finding Support Online
In addition to her physical symptoms, Ms. Conway is careful to also focus on her mental health. “Getting diagnosis after diagnosis was depressing,” she says. “My Wonder Woman cape was fairly tarnished by the time I entered therapy with a psychologist. I had thought I was strong enough to handle everything, but when my body wouldn’t do what I wanted it to do, I felt like a stranger in it.”

As a means to vent her frustration about her life with chronic illnesses, in 2012, Ms. Conway started the blog “As My Joints Turn: My Autoimmune Soap Opera.”

“Initially, it was a way to get my thoughts and feelings out,” she says. “Eventually, other patients started to find it, and suddenly, I had a following. It’s comforting to write about a difficult day and have a bunch of fellow patients understand me. It’s a big comfort to know I’m not alone.”

Ms. Conway also joined autoimmune and arthritis groups on Facebook to find like-minded people facing similar challenges. “They give good advice or just listen when I need to vent,” she says. “Some of my online friends understand me the best.”

Advocacy
Throughout her career as a speech-language pathologist, Ms. Conway has advocated for her clients’ rights to education and accessibility. She has attended rallies for education rights, contacted state government representatives regularly and participated in awareness campaigns for autism. At one point a colleague remarked, “Wouldn’t it be great if someone advocated for you the way you do for your students?”

This was a light bulb moment for Ms. Conway. It began her journey as a patient advocate.

Through social media, in 2013, Ms. Conway learned about the ACR’s Advocates for Arthritis, an annual event held in Washington, D.C. Since then, she has participated in the event three times. She has joined with rheumatologists and other patients to speak to members of the U.S. Senate and House of Representatives about the needs of rheumatology patients.

“Many politicians know the cost of drugs and the need for research, but they don’t truly understand the day-to-day needs of most rheumatology patients,” she says.

She explained to a healthcare aide in Rep. Patrick Meehan’s (R-Pen.) office that some drugs don’t work for certain people and that making patients go through the step therapy process is antiquated. Personally, Ms. Conway tried six different medications over a seven-year period before she could get a biologic drug that worked for her. The drugs that insurance companies deemed safer and more cost effective were actually ineffective for her.

“When I [started to] take a biologic drug on a higher tier level, I felt much better,” she says. “Politicians need to understand this. I want to be the voice that helps them understand.”

Ms. Conway also advocates for rheumatology patients through the non-profit organization she cofounded in 2013, the International Foundation for Autoimmune & Autoinflammatory Arthritis. The foundation is aimed at helping patients living with autoimmune arthritis use their voices to affect education, advocacy and research. She says, “Social media introduced me to patients who inspired me to use my voice to become an influencer and advocate for autoimmune arthritis.”

Karen Appold is a medical writer in Pennsylvania.