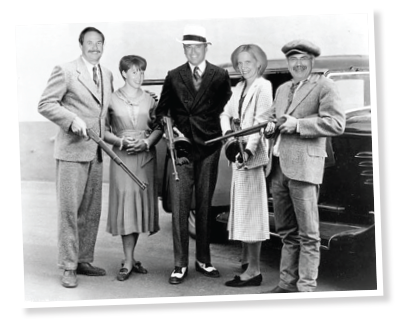 In March 1987, Mark Andrejeski moved from Columbus, Ohio, to Atlanta to lead a brand-new organization: the American Rheumatism Association (ARA). The professional association of rheumatologists had separated from the Arthritis Foundation 15 months earlier.

“Initially, I was just trying to make sure the organization survived,” says Mr. Andrejeski, who studied business management and economics in college. After graduation in 1973, he worked in educational programming and fundraising for the American Heart Association, known for its high-profile public education programs. The ARA had a decidedly lower profile.

“I didn’t know what the American Rheumatism Association did when first contacted about the job,” Mr. Andrejeski says. “Rheumatology was relatively unknown back then. One of the first membership surveys we did told us that increasing awareness of what a rheumatologist does was a high priority.”

Mr. Andrejeski, who will retire as executive vice president on May 31, got to work. In 1989, the ARA changed its name to the American College of Rheumatology (ACR). He worked with volunteer leaders to expand medical education and advocacy, and create rheumatology practice standards and ethical principles. He built a marketing program, expanded government affairs and standardized the ACR’s contractual relationships with corporate sponsors. He preferred to lead from backstage while volunteers crafted the vision and enjoyed the spotlight.

“My job has always been to try to see the big picture, to understand where the organization was, where it was going and what steps we needed to take to keep moving forward. I was always fortunate to have presidents, Executive Committees and Boards of Directors who had a clear vision. Once I had their vision in mind, I could make it work,” he says.

“The hope then was that Mark would continue to hold this position for many years to come,” says Dr. Croft. “During Mark’s tenure, the commitments of the organization have dramatically expanded in every phase of its mission, namely advancing rheumatology.”

“Our fiscal status has been meticulously managed by Mark, his staff and the board, and the ACR has achieved financial success of significant proportions,” says Dr. Croft. “Our mission and overall success have advanced at every level during Mark’s tenure, and his leadership, clear and creative vision, work ethic and commitment to the ACR have been instrumental in achieving those successes.”

Jane S. Diamond, MPH, managing editor of Arthritis & Rheumatology, was on staff in 1987 when Mr. Andrejeski arrived. “There was an immediate sense of confidence about the future of the organization, and he delivered on that,” says Ms. Diamond. “The fact that we still feel so confident about the future of the ACR without Mark is also a testament to him.”

Mr. Andrejeski takes pride in the achievements of the people who work with him. “I have had five different people on my staff over the years who have gone on to run national associations. That, in terms of my contribution to my own profession, is something I am really proud of,” he says.

Steven Echard, IOM, CAE, now chief executive officer of the American Association for the Study of Liver Diseases (AASLD) in Alexandria, Va., is one of those recruits. He joined the ACR staff at age 25, eventually becoming the executive director of the Rheumatology Research Foundation, a position he held from 2005–’14. He praises Mr. Andrejeski’s “ability to manage the governing process and assist volunteer leadership in making sound decisions. The financial success of the organization over the past 30-plus years is a direct result of his leadership and sound business acumen.”

“We always had great discussions about his theories of management and rationale for organization and staff decisions,” says Mr. Echard. “I will forever be grateful for the ACR’s support, and for Mark’s personal support, for me to achieve these goals.”